Burrata with peaches, nasturtiums and pistachio

“We’re going to the nurseries.”

These words were a death knell to an enjoyable Sunday when I was a kid. I mean, what had I done to deserve this punishment? I just wanted to play with my LEGO. Nurseries were drab and run-down, festering down some country lane in the backwaters of Essex. They made not a single gesture to alleviate the boredom of pre-teen customers mercilessly dragged along by parents. Dawdling between rows of potted plants lined up like prisoners on death row and shrubbery begging to be put out of its misery, I sought warmth in the greenhouse as my parents stood in the freezing cold debating whether to plant runner beans or carrots as if our survival depended on it. Looking back, the Sunday nursery visit was an introduction to middle-age ennui. Without making it explicit, this was what the future held: The highlight of the week would be deciding whether to grow carrots or runner beans. Who cared when I refused to eat either?

The title of this Vinous Table is misleading in two respects. Firstly, Petersham Nurseries is much more than your common or garden café. Secondly, it is a fully functional nursery for the green-fingered denizens of Richmond, but not like those I visited in childhood. It’s a frightfully posh, almost highfalutin nursery catering for wealthy locals who probably employ full-time gardeners to install exotic bushes imported from Ecuador or marble Greek statues the price of a small bungalow. I never checked to see whether Petersham Nurseries stocks runner beans or carrots. But if they do, then they are likely to have undergone massal selection under the supervision of Lalou Bize-Leroy.

Petersham Nurseries, nestled close to the Thames in the grounds of Petersham House, is owned by Francesco and Gael Boglione, who established a nursery for the banal reason that there simply wasn’t one nearby. Australian chef Skye Gyngell joined in 2004 and persuaded the Bogliones to add a place for customers to eat and drink. With a rudimentary kitchen at her disposal, Gyngell focused on sourcing the finest seasonal ingredients. Her modern European cuisine soon gained this kooky restaurant a loyal following. It remained a cherished local haunt until 2011, when it won a Michelin star to great hullabaloo.

Chefs covet the stars, but for Gyngell it was a curse. Customers began turning up in droves expecting a Michelin-starred restaurant with all the frills, forcing Gyngell away from the simplicity of her vision. She fractiously quit the following year and hit the headlines for declaring that she hoped never to win another star, a quote that she later regretted. Gyngell went on to establish the well-respected Spring in Somerset House. Meanwhile, Petersham Nurseries carried on and still continues Gyngell’s ethos of seasonal fare sourced from Haye Farm, owned and run by the Bogliones’ son Harry.

I had heard about Petersham Nurseries, and given its novel location, had always wanted to dine there. During the lull in COVID-19 cases in the summer of 2020, a friend suggested it would be a suitable venue after weeks of self-isolation. I caught the train to Kingston upon Thames, and then enjoyed a picturesque riverside cycle ride up to the restaurant door. 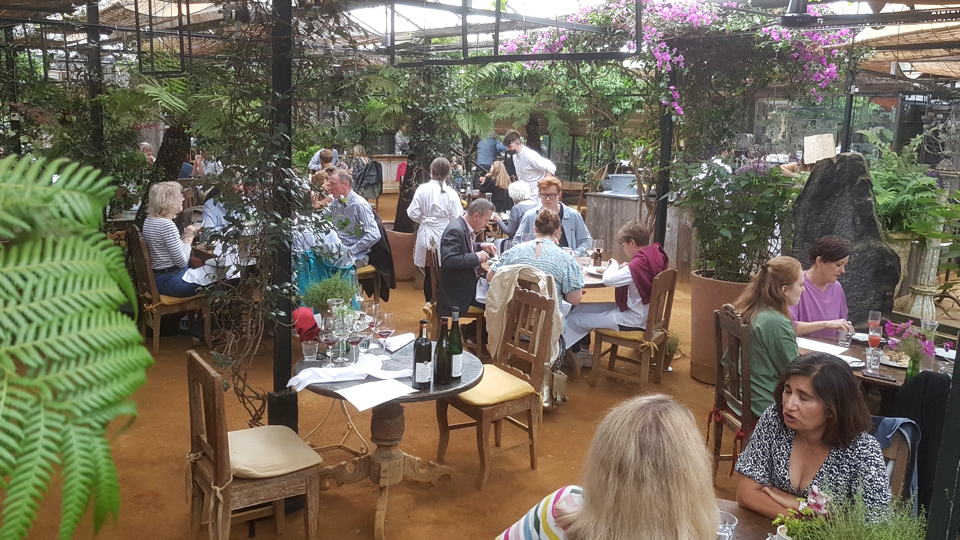 Petersham Nurseries is different from almost any other establishment that I have visited. It is essentially a greenhouse, and though under cover, it conveys the ambiance of eating outside. It brought to mind a botanical conservatory without the manipulated temperature. The interior is festooned with greenery, ferns and flowers, as you would imagine, but there’s also an earthen floor covered with wooden floorboards, rustic artwork, hanging baskets, antique chandeliers and mirrors, all designed to look thrown together but doubtless planned to the finest detail. Under sunny skies it must be idyllic; however, this being a) England and b) August, there was a torrential downpour midway through our main courses. Cue rainwater dripping from the ceiling into hastily positioned buckets and large puddles traversed in order to enter the outside restroom. For me, it added to the fun. 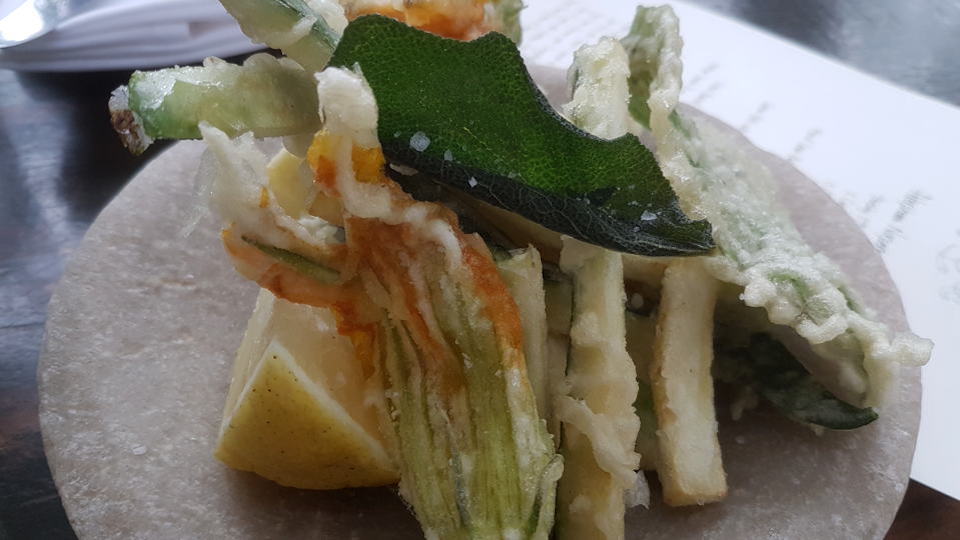 The focus is firmly on beautifully presented, simple dishes that are impeccably sourced – feel-good food. The menu reflects the Bogliones’ heritage, so many dishes have an Italian twist. We commenced with garden fritti consisting of zucchini, borage, sage and flowers. The presentation was so exquisite that you felt guilty tucking in. Having devoured a great deal of tempura in my time, I am quite fastidious about my deep-fried veg, and this was spot on – with just the right amount of thickness and crispness, the zucchini cooked to the perfect consistency. 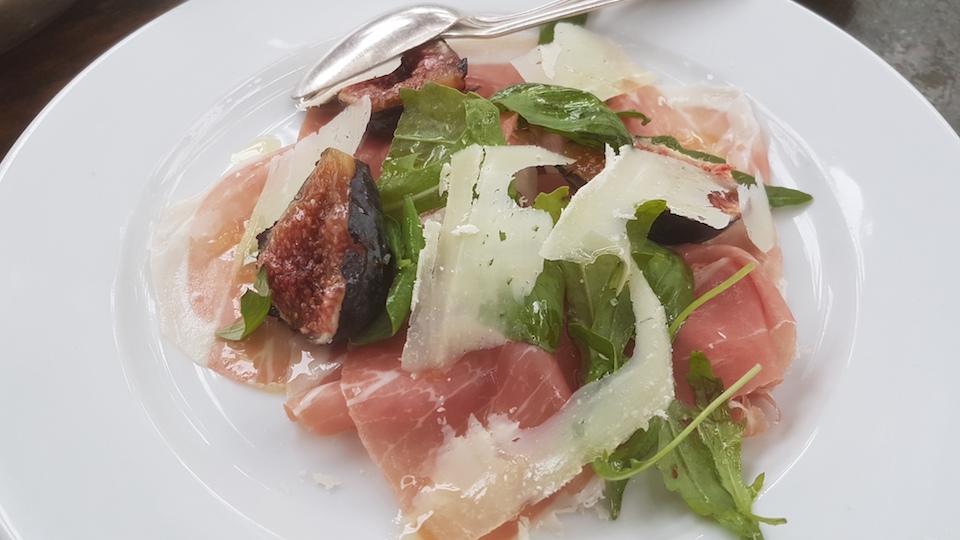 The accompanying starter of prosciutto San Daniele with black figs, Tuscan pecorino, basil and rocket was as delicious as it reads. Naturally, this was all dependent upon sourcing. The prosciutto was as good as I have eaten in London and complemented the sweet and juicy figs, the rocket and basil lending all-important pepperiness. Close your eyes and you could be eating this on the balcony of some Tuscan villa. Likewise, the burrata was packed full of flavor and the peaches delivered just the right amount of sweetness and acidity to keep everything balanced.

The chef prepared a special main course, a bistecca alla Fiorentina with roast potatoes, for us to share. This traditional Florentine dish of porterhouse steak seasoned with rosemary and sage was delicious, though having enjoyed lighter and more wholesome starters, and perhaps given my watchful eye on my diet, it felt just a little heavy in the scheme of things. Oddly, although it was the centerpiece of our lunch, it is the one dish that I could have left out and still been happy. 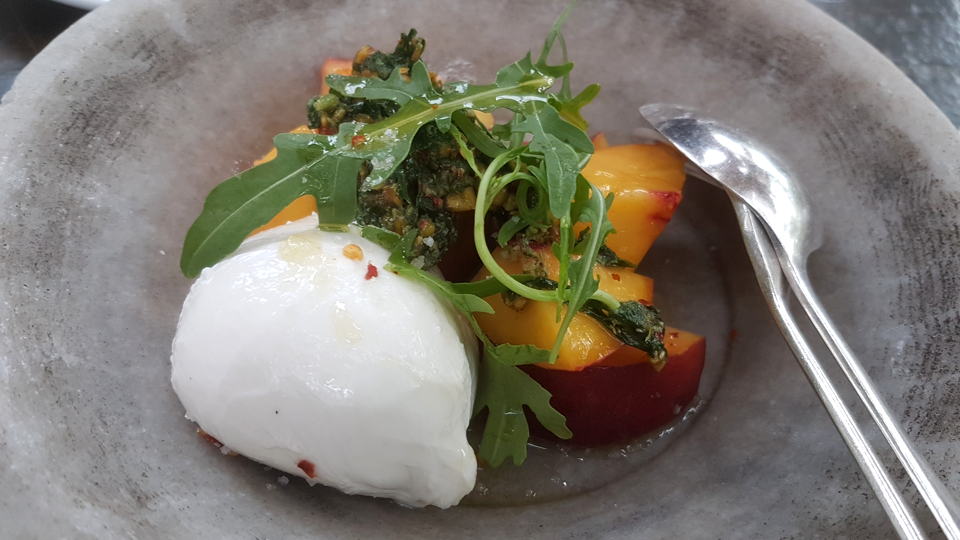 Burrata with peaches, nasturtiums and pistachio

The dessert of Amalfi lemon posset with blueberries, white chocolate and vanilla tuile was maybe my favorite. The lemon posset might well be the finest that I have ever eaten, a perfect balance between sweetness and acidity, the white chocolate judiciously sprinkled and the vanilla tuile the final touch. I could have eaten two. Again, the sourcing of ingredients elevated what is essentially a simple dish into something extraordinary.

Moving on to the fermented grape juice, we commenced with the 2017 1961 Block Riesling from Pewsey Vale. The nose is intense, delivering exuberant lychee and gooseberry scents given a subtle petrol-like lift that almost took me to Alsace rather than the Eden Valley. The palate demonstrates good weight and fine acidity, a slightly viscous texture, and lovely nectarine and (again) lychee notes toward the generous finish. It does not even pretend to be profound or cerebral; that’s not the point. But for under 20 quid, it is delicious Riesling that you could cellar if so desired. From my own cellar, I whisked a 2015 Vosne-Romanée Les Petits Monts 1er Cru from Domaine Berthaut-Gerbaut. Her wines often benefit from aeration, and so it proved with this Burgundy, which began motoring half an hour after the first pour. The aromatics gradually coalesce to reveal blackberries, raspberry coulis, touches of brown spice and wilted rose petals, all informed by the 20% whole bunches. The palate gains weight with aeration, feeling lithe in the mouth thanks to its pliant tannins while capturing the lushness that came with many of the 2015 Vosne-Romanées, and concluding with a savory, slightly ferrous finish. It is probably too young to entertain at the moment, so afford it two or three years in bottle. 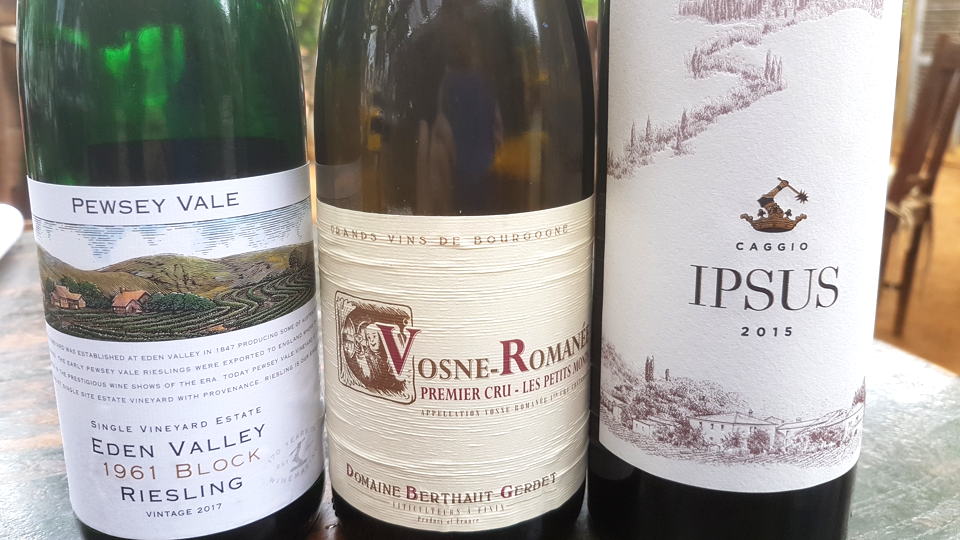 The final bottle was the 2015 Ipsus from Caggio. This maiden release comes from 6.5 hectares of Sangiovese owned by the Mazzei family, matured 50% new tonneaux and 50% in stainless steel, plus eight months in cement vat. This was the first time I had tasted Ipsus, and I was impressed. Sure, it is primal on the nose and needs another year or two to subsume the oak, but it offers gorgeous scents of ebullient red fruit tinged with crushed violets and a hint of peppermint. The palate has more density than a lot of Chianti Classico and is quite insistent in terms of grip, offering pure blood-orange-infused, luxuriant red fruit toward the grippy finish. It improved with aeration and after a couple of hours was more open and floral. Superb.

I must confess that I was making up for lost drinking time, and so the cycle ride back along the Thames through the rain was fraught with near misses. When I finally got back to Guildford, I was marooned at the station by torrential rain for over an hour, before risking life and limb and finally arriving home looking like a drowned rat. But at least my trip to the nurseries had been a whole lot more exciting than those endured with my parents.

Petersham Nurseries is closed at the time of writing due to COVID-19 restrictions. However, it will reopen, and at a time when the hospitality industry faces a multitude of challenges, I decided to publish this Vinous Table to remind readers of the joys of fine dining that will inevitably return. Following the UK government’s announced roadmap out of lockdown, Petersham Nurseries should reopen from April 12, 2021 since the restaurant is classed as outside dining.