When I am travelling in winegrowing regions, I generally do not look to Michelin for restaurant guidance. I talk to the local producers. They know firsthand whose popularity is waning, whose star is ascendant and, most importantly, who are the new chefs in the region. On my first day on the Loire to research my recent article on Cabernet Franc, I was surprised to hear every winemaker mentioning the same cook, a gentleman they all just called Vincent. No family name, merely Vincent. More soberly, he calls himself only ‘cuisinier de campagne’, or country cook. Some admirers have already found another moniker, Chef of Mother Earth.

His real name is Vincent Simon. With his wife, Olivia, he once ran a very successful and highly acclaimed restaurant near Liege in Belgium, but was tired of the grind of managing such a large operation. So they sold it and opened a much smaller place in Ingrandes-en-Touraine, a little village a half hour’s drive west of Tours on the border of the appellation of Bourgueil. The at most fifteen guests that they receive each evening are comfortably seated in the living room of an old manor house that once belonged to a family of winemakers. The ducks, geese and chickens that are served spend their days scratching, pecking and crooning in the nearby vineyards, but sleep at night in the property’s lovely stone barns, as do a warren of rabbits. It is like those long ago dinners on grandmother’s farm. 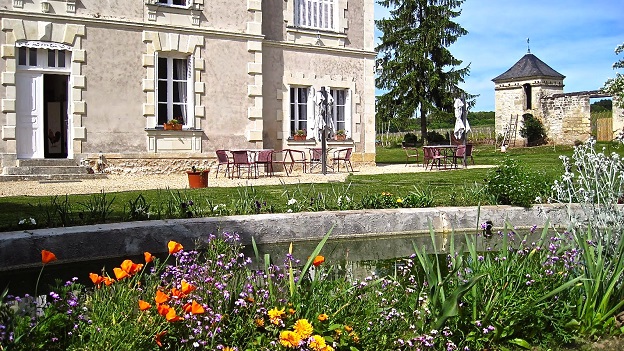 Everything here is charming, serene and, most importantly for Vincent Simon, in harmony with nature. While the surrounding meadows curve softly into the hillocks, the Loire runs its course below. The air is pure and the clouds waft on the horizon at sunset. His goal is to turn the earth into music. All of the vegetables come from his own gardens. The free-range eggs are the base not only for pastry, croissants and wafers, but also ice cream and ‘oeufs en meurette’. The poultry will eventually end up in the oven. “I intend,” he says, “to offer only the finest chicken to my customers. All of the animals have had the freedom to roam.” 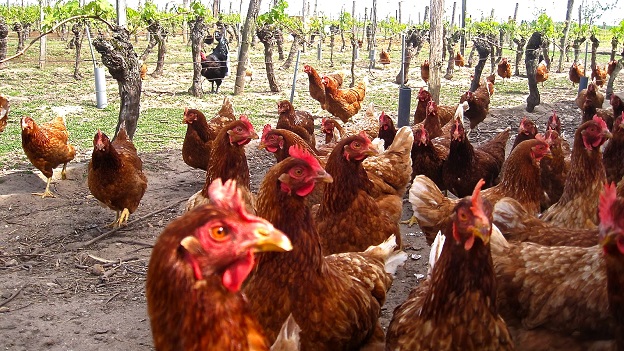 Chickens roaming freely about the vineyards

I was lucky enough to have had the opportunity to dine here with friends on my third evening in the region. At the five spacious tables, we were only thirteen guests. Harvest had only ended the night before, but it was already cold and wet, so we enjoyed a winter’s menu, which included amongst many other delights a delicate aspic of chicken and lentils, a basted pie of fresh bream from the Loire, a stuffed goose terrine in its own juice and a confit of pig’s cheek with parsnip.

After an enticing 2012 Vouvray Clos Baudoin from François Chidaine and the still incredibly youthful 2011 Bourgueil Grand Mont from Domaine de la Chevalerie, we finished the evening on Yannick Amirault’s superb 2005 Bourgueil La Petite Cave, which one of my guests described poetically as “reminiscent of a forest after a rainstorm.” 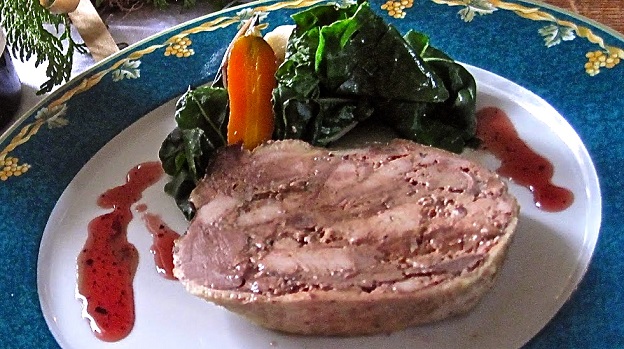 Stuffed goose terrine in its own juice

Simon has already bought an additional few acres nearby where he hopes to run his own pigs, sheep and perhaps even a few cows. Moreover, he now has a few rows of vine whose fermented fruit will one day be served by the glass. The wine list is only local and includes not only the well-known estates, but also those from friends that he has cultivated in or near Bourgueil who share his ideals.

There is much talk today among locovores about restaurants like Noma in Copenhagen or Fäviken in northern Sweden, but once an establishment becomes too famous it often loses a touch of its luster. Vincent Simon has only been open since June of 2013, so it’s not too late to enjoy the original thrill. That is what I did! Being a bit solipsistic, I went back all alone the next day between my last morning’s appointment and the first in the afternoon for their luncheon menu, which cost only €18. With this quality of fresh ingredients at that price, it is hardly surprising that La Galottière is generally booked out long in advance. To borrow a phrase from Michelin, Chez Vincent is certainly worth a detour for any gourmet travelling along the Loire.