Cured kingfish with a pistachio crust and Oscietra caviar

Scallop in a champagne and yuzu kosho sauce with caviar

Once in a while, you dine at a new restaurant without expectations and what d’ya know, you depart with mind truly blown, tastebuds eternally grateful and diary demanding to know when you’re coming back. This happened during the first week post-lockdown when a friend invited me for lunch at Sola, or to give it its correct spelling, SO|LA. Having opened just 18 months ago in Dean Street in the heart of London’s Soho, SO|LA spent much of its short life with its shutters down, though that did not prevent it from being fully booked for the next few weeks after reopening in May. Chef Victor Garvey, who had worked 13 days on the trot preparing to reopen, clearly used the down time wisely, redesigning the menu and experimenting with ingredients and dishes. Advertised as a Californian-inspired restaurant, in reality SO|LA is Japanese cuisine with a nuanced West Coast twist. Underpinning every dish is meticulous sourcing. Garvey explained that many ingredients are imported either directly from Japan or from the sweet spot for fruit and vegetables on the French–Italian border. 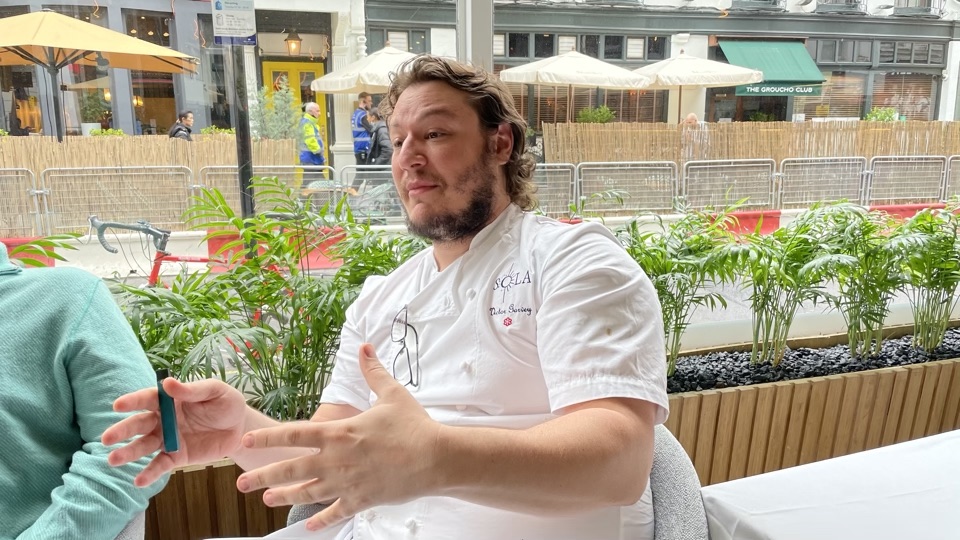 Garvey is clearly a young and motivated chef with oodles of talent. Born in New York to an American father and a French-Spanish mother, he commenced working in kitchens as a teenager, followed by stints at Picasso in Las Vegas, Ryugin in Tokyo and Noma in Copenhagen, before opening SO|LA in November 2019. Speaking to one of my fellow diners who has been here several times, it would seem that this is a very good restaurant that has benefited from the lockdown to raise its game to a whole new level.

The menu is presented in simplified form: three words per course. That is deceptive because every dish was extraordinarily detailed, to the extent that I could hardly keep up with the explanations that I have done my best to reproduce in this piece. Apologies in advance for any errors or omitted information, but the bottom line is that I hope I convey the level of gastronomy. 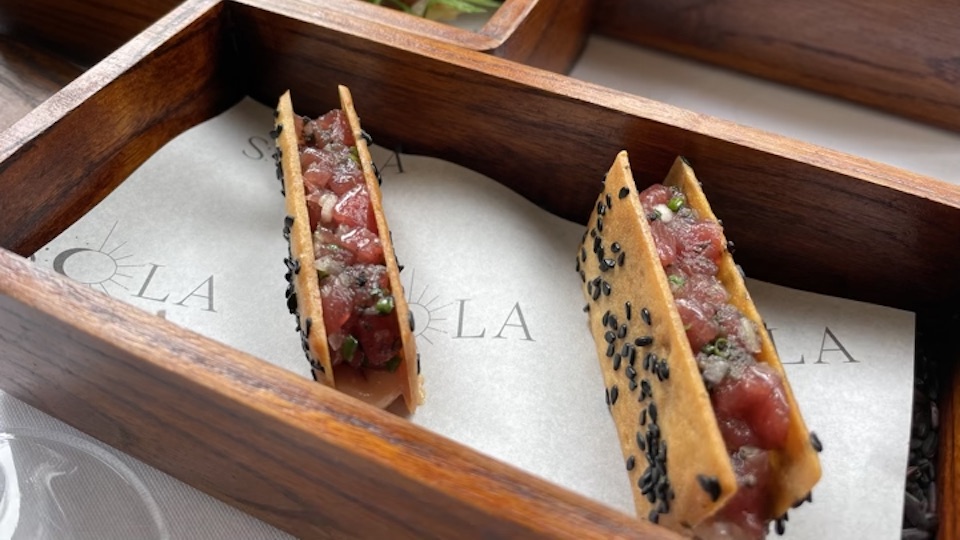 Following on from airy Parmesan gougères and straws, the amuse-bouche was entitled “Scombridae,” the name of the fish family that includes tuna and mackerel. It comprised three parts, each housed in a wooden box. The first box revealed Spanish bluefin tuna with foie gras, black truffle and tomato gastrique. The second box offered mackerel cured in Okinawan black sugar and miso, meticulously curled inside a Roscoff onion tartlet with anchovy butter and topped with parsley and purple flowers. In the final box there was cured kingfish with a pistachio crust and Oscietra caviar sourced from N25, which I am reliably informed is one of the UK’s premier suppliers. My pick of the three was the kingfish, so light and tasty, flavors dancing on the tongue. The tuna was just a little larger than necessary, the foie gras squelching out of the side and over my fingers. Delicious, but maybe the foie gras was surplus to requirements? But that’s nitpicking. These amuse-bouches gave a clear signal to prepare for lunch fit for a king. 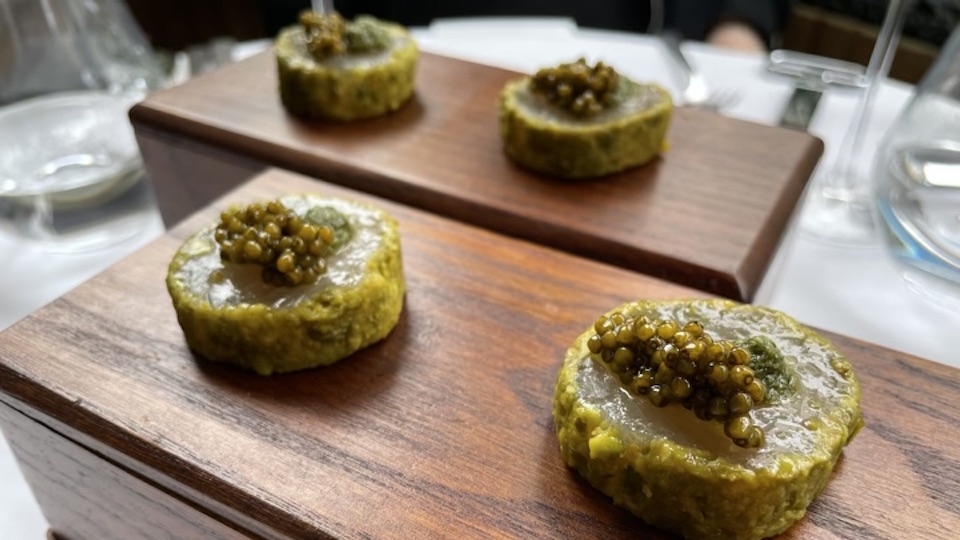 Cured kingfish with a pistachio crust and Oscietra caviar

Next came a sensational dish consisting of Jouno cherry tomatoes, passion fruit and melon sorbet served in a Coure de Vesuvio consommé. This was brilliant, absolutely top-class. The fastidious sourcing of ingredients from Provence elevated this dish, the tomatoes zinging with tension and brightness, the consommé instantly refreshing the palate. Ostensibly it is a killer palate-cleanser. 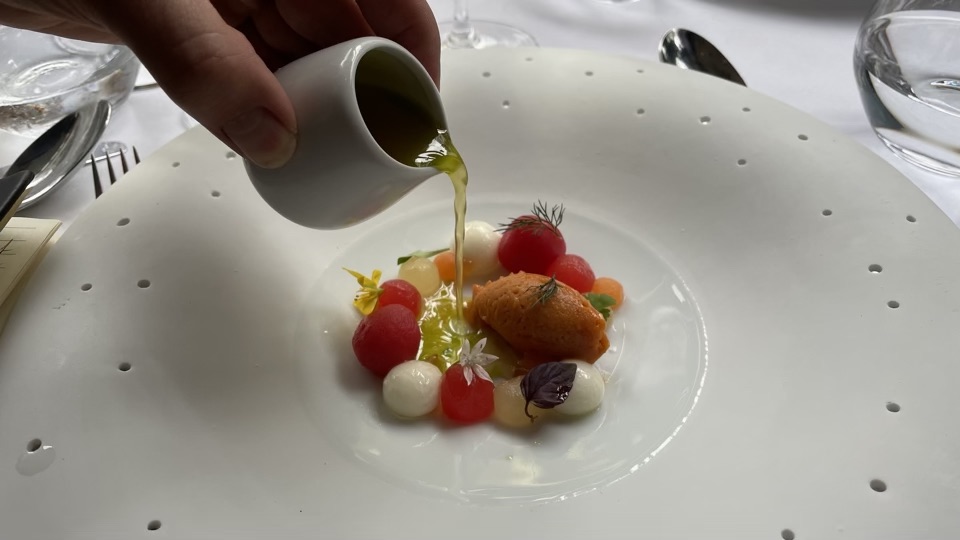 The third course was built around brown crab – or, to be exact, Dartmouth confluence crabs, which Garvey told us grow twice the size of regular crabs, presumably due to the merging currents. This was served with a miso foam dressing, ponzu jelly and a Ventimiglia pea mousseline, finished off with purple Japanese shiso leaf. This was a more complex dish, the ponzu jelly lending a spiciness on the back palate and those Ventimiglia peas redefining what the humble pea can taste like. The shiso leaf has the effect of slightly numbing the tongue, just like a Szechuan pepper but with more subtlety. Garvey brought to our table a box of fresh shiso so that we could gauge its effect, which was actually stronger than I expected. 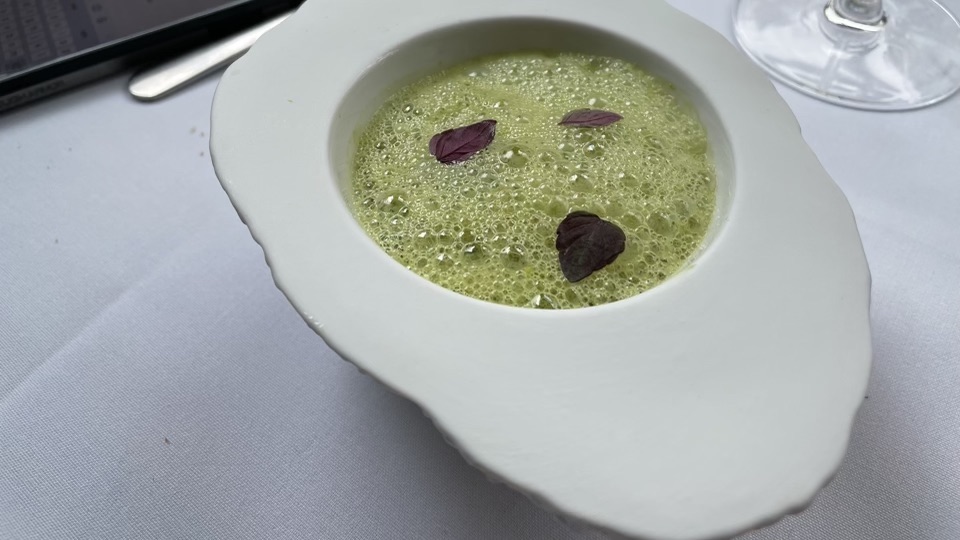 We stayed on the crab theme with a tempura of white and brown crab with pea mousseline and borage, presented on a solid silver crab. This was perhaps the most succulent and, for want of a better word, coziest of the dishes. 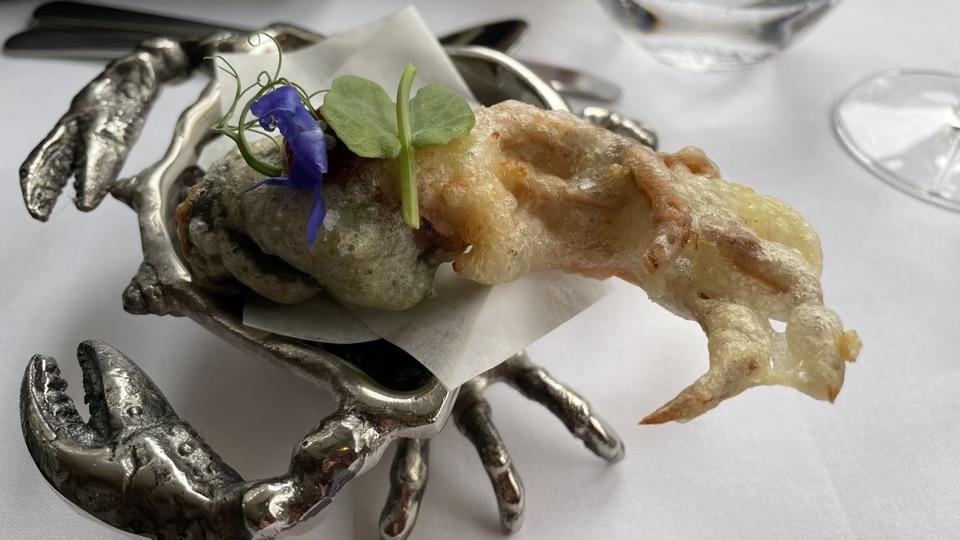 Tempura of white and brown crab with pea mousseline and borage, presented on a solid silver crab

The standard was not about to drop. Next came a bit of theater as the Scottish langoustine tails were flambéed in Japanese Nikka whiskey next to our table and then served on a heated rock. This was partnered with a small dish of slow-cooked quail’s egg, miniature cabbage, daikon and a wild mushroom tortellini in a shiso dashi. Everything here was perfectly balanced, the langoustines succulent and given extra depth of flavor by the whiskey. 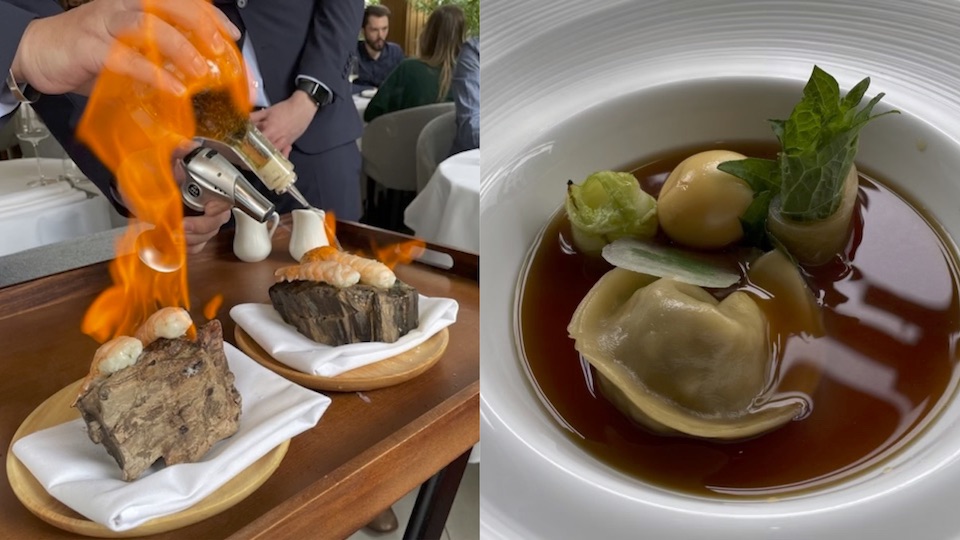 The pan-fried scallop came with a champagne and Japanese yuzu kosho sauce (citrus zest, garlic, chili and salt) and caviar. Perhaps this did not quite match the preceding dishes, the scallop just needing a little more fleshiness. An extra dish came in the form of a tempura soft-shell crab with borage, Ventimiglia pea shoots and shiso leaf. This was absolutely divine, extremely complex in flavor and lent an undercurrent of fieriness by the shiso leaf that only became palpable on the back palate. Genius. 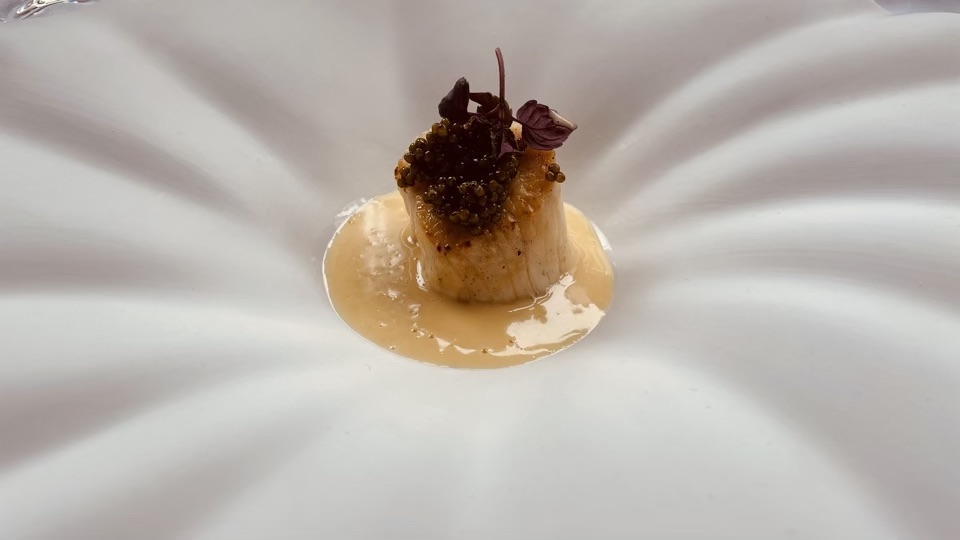 Scallop in a champagne and yuzu kosho sauce with caviar

Next came the squab pigeon, sourced from Anjou and grilled over Japanese white charcoal, served with foie-gras-stuffed morels, Nashi pear, toasted buckwheat and sansho in a chicken mousse and onion soubise sauce. The squab was just fabulous and married beautifully with the pear. I appreciated that the squab was not too large, which would have unbalanced the menu as a whole. 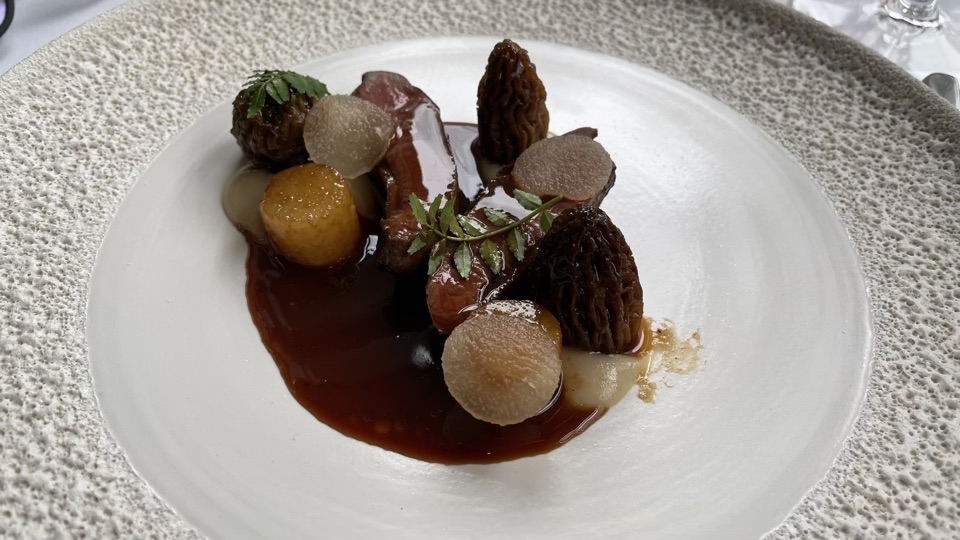 Two desserts finished this astonishing lunch. The pre-dessert of Sorrento lemon, vanilla and yuzu mousse came with light-as-a-feather meringue and crème fraîche. It was wonderful, not too heavy and perfectly balanced, but it turned out to be the warm-up act for a stunning Panama Geisha. 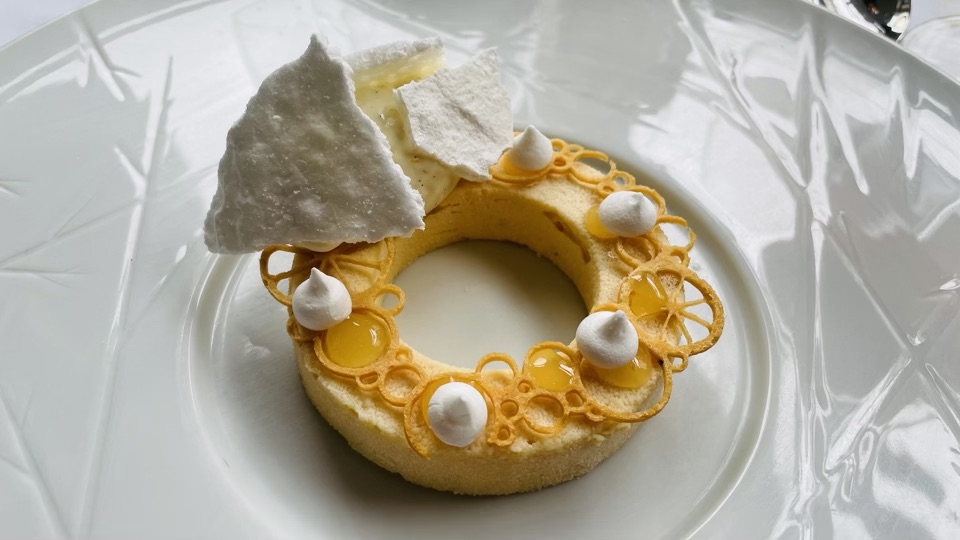 Panama Geisha is not named after the Japanese courtesan but rather for a much-sought-after coffee bean, correctly spelled “Gesha,” that hails from Ethiopia but has created its own genetic fingerprint and reaches its zenith when grown in Panama. Gesha is in fact one of the most expensive coffees in the world. It is brought in by The Difference Coffee, a company that sources the world’s most coveted coffee beans at auction and ingeniously inserts them into capsules, making them perfect for restaurants and increasing numbers of private customers. Despite this, it did not dominate this dessert, instead acting as a guiding hand, complementing the dark chocolate croustillant, Geisha coffee mousse à la Louis XV (Alain Ducasse’s iconic dish perfected in Monte Carlo) and chocolate and porcini tuile with a salted caramel sauce. This may be one of the best desserts I have encountered in a long time. That I only ate half because I had dinner planned that night is testament to my self-control and stupidity. 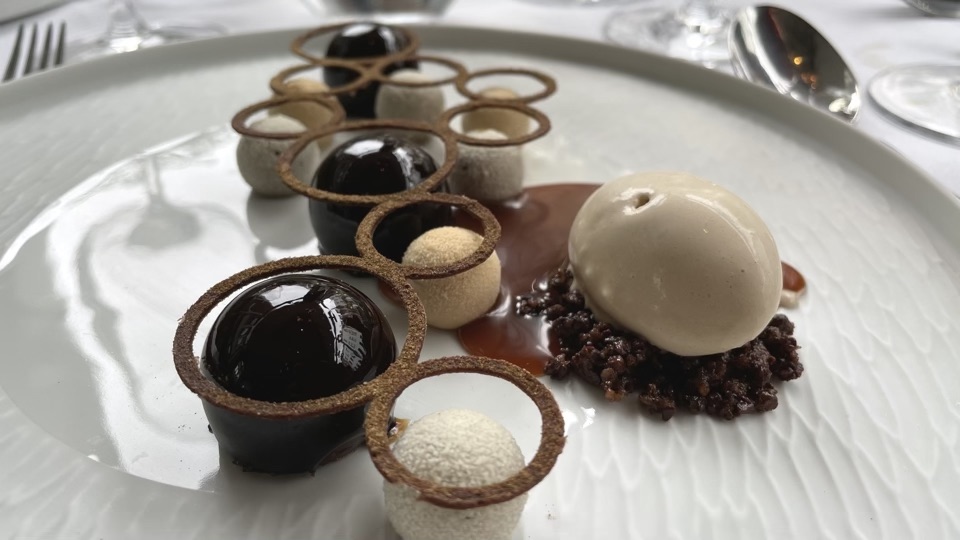 The wine list leans toward California, as you would expect, and includes many sought-after labels, though we were permitted to pay corkage on bottles.

We commenced with champagne, courtesy of the 2014 Brut Nature Blanc de Blancs Premier Cru Terre de Vertus from Larmandier-Bernier, which undergoes at least five years’ aging on the lees without any dosage and features a light pétillance. The bouquet requires two or three minutes to find its groove, eventually offering enticing scents of white peach and almond; a hint of lemon sherbet comes through with time. It is elegant and displays commendable weight (not a Zen-like champagne). A crisp sour lemon note lends sufficient tension toward the finish. Beautiful. This was followed by the 2016 Bourgogne Aligoté from Domaine Arnaud Ente. “Best wine in the range?” I half-jested, in praise of Ente’s Aligoté rather than disparaging his Chardonnays. Pale silvery in hue, it offers attractive scents of white flowers and apricot blossom, linden and hints of lemon verbena. The palate is well balanced, although I would have liked a little more tension toward the stem-ginger-tinged finish, which I felt was a little “woolly.” Staying in Burgundy, the 2018 Puligny-Montrachet Les Folatières En La Richard 1er Cru from Domaine Etienne Sauzet came across a little – dare I say – Californian on the nose, the oak more prominent than I recall from barrel, traces of orange blossom emerging with time. The palate is smooth with good acidity, and quite saline toward the finish, although it needs a little more tension and race to develop. 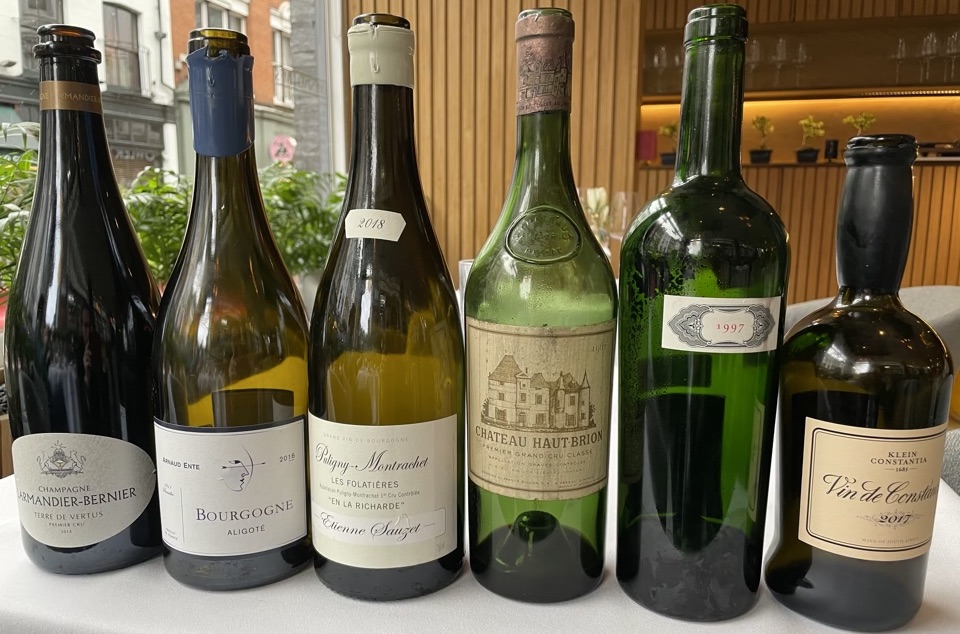 The first of two reds was the legendary 1961 Haut-Brion. I took over cork-pulling duties and managed to gently ease it out with a waiter’s friend. (I’m a dab hand; it’s all about patience and measuring the pressure of the cork as it is extracted.) Deep in color, this showed a little funk on the nose that did not entirely blow off, though the palate was sturdy and deep, delivering pitted black olive mixed with hung game, a little feral but impressive. Next came an intriguing wine, the 1997 Napa Valley Reserve Red Wine, a release from the private wine club founded by Bill Harlan. I cannot find a single tasting note for this wine, but here it goes: Deep in color, offering youthful scents of black cherries, fig jam, maraschino cherries, star anise and glycerine. The palate is similarly youthful with succulent ripe tannins, quite viscous but displaying good acidity. A star anise and clove-tinged finish reminds me of a fine Côte-Rôtie. It is a delicious wine with bold flavors, though it has not evolved secondary aromas or impressions that capture the imagination, and to be truthful, it lacks a bit of soul. We finished with a welcome dessert wine in the shape of the 2017 Vin de Constance from Klein Constantia, which mirrored my recent tasting note. Just heavenly.

This was a very impressive lunch. Clearly Garvey has the talent to back up his intricate dishes. The effort that goes into the sourcing was clear to see, smell and taste, and despite the number of courses, there was a lightness to everything, so you did not feel stuffed afterward. Garvey mentioned that he is considering eschewing meat altogether, though personally I enjoy a multi-course menu themed around vegetables and fish with a single foray into meat to add contrast. The service was excellent throughout. The fixed-price menu is £89.00 per person, not exactly inexpensive but worth every penny. SO|LA deserves a high profile, and that is inevitable as word gets around. Let’s be clear: this is comfortably two-star cuisine in all but name. Given that restaurants have only just reopened, it is unsurprising for me to pronounce this the best meal I have eaten so far in 2021. Whether any restaurant will be able to match it is another question. The bar has been set extremely high.