This recent dinner with two close friends was a brief but much needed respite from current events. Don’t worry, it was just three of us, very socially distanced, in case you are wondering. As the country grappled with the COVID-19 pandemic and an unsettled Presidential election, taking a short time away was invigorating. This time of year I am usually in Piedmont. While I could not take that trip this year, I was able to make a simple dinner to go with these utterly fabulous wines.

A good truffle, some rice, butter, Parmigiano Reggiano and a few good bottles. What else do you need? Nothing, in my book. Before we get started, let’s get one thing out of the way. I am not a professionally trained chef. Both of my parents cook, and I grew up in house where every meal was made from scratch, every day. Although I never studied cooking, I did wait tables in my student days in some pretty nice places in the Boston and Cambridge area. I won’t tell you about the very famous Boston restaurant where I was fired. You will have to give me a few good bottles of wine to get that story.

My best experience was at Salamander, in Cambridge, which I helped open. Salamander was the restaurant of Stan Frankenthaler, an immensely talented young chef and a protégé of Jasper White, who was the father figure of Boston cuisine in the 1980s and early 1990s. One of my favorite jobs at Salamander was being the food runner, an assignment that was rotated among the waitstaff. I loved being in the kitchen, everything about it. The intense heat, the energy, hearing the expediter call out the tickets and watching as chefs plated dishes I would then take into the dining room. And that’s basically where I learned a few things about cooking.

I have to say, I was quite surprised by some of comments we received when Eric Guido published his Vinous in the Kitchen episode on risotto. The passion of replies dwarfed the intensity we hear on wine debates like alcohol levels, leaner versus more opulent styles, what is and isn’t an expression of terroir, etc. Foodies were extremely vocal about what ‘traditional’ risotto is supposed to be. I am not here to settle that debate because I am not a food historian, and I don’t know. What I do know is that I learned to make risotto from a James Beard book, and that recipe has always worked great for me, so that’s what I use. My rules are simple: Carnaroli rice, real Parmigiano Reggiano, unsalted butter and only homemade broth, nothing out of a box, ever. Risotto must be cooked rigorously al dente, and if you are doing truffles, the goal is to make Truffles with Risotto, not Risotto with Truffles. 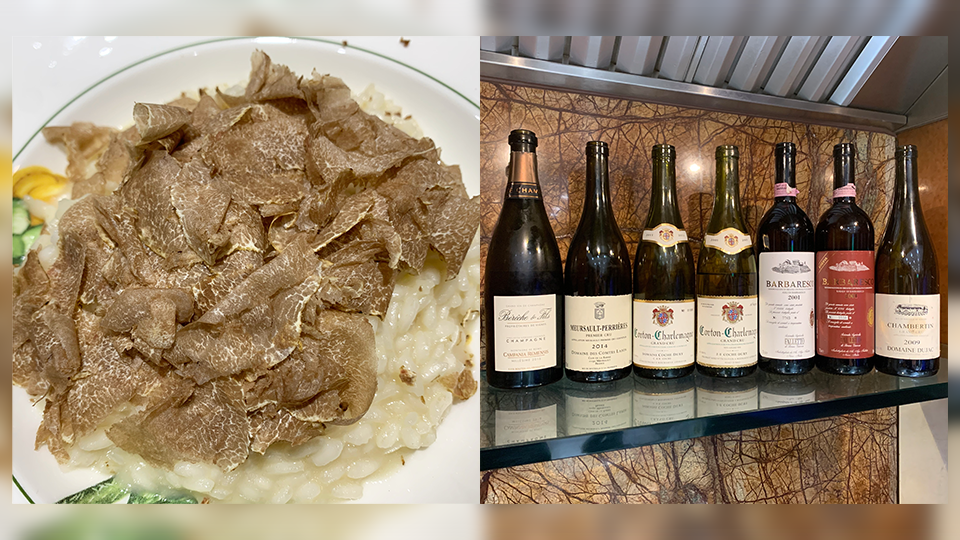 Truffles with Risotto alongside some special bottles.

As for the wines, well, they were pretty spectacular. We started with the 2016 Rosé Campania Remensis, which I recently reviewed in my Champagne report. It is one of my favorite wines from the Bérêche family. The 2016 edition is taut, nervy and a fabulous opening Champagne to whet the appetite. I loved it. Lafon’s 2014 Meursault Perrières 1er Cru is off the charts. I chanced upon a parcel of 2014 Lafons recently, and every bottle has been absolutely stellar. This is no exception. The 2014 is classic Perrières. Veins of acid and saline-infused minerals run through a core of white orchard fruit laced with a classic touch of reduction. What a wine.

Two vintages of Coche Dury’s Corton-Charlemagne Grand Cru follow. Neither 2011 nor 2003 is especially highly regarded, but it is precisely vintages like these that can be so instructive because they tell us so much about what talented growers can achieve in challenging years. The 2011 Charlemagne benefited from several hours of air to open, which is not surprising, as it has always been a stubborn wine. I remember that Jean-François Coche hesitated to show the Charlemagne when I stopped by to taste the bottled 2011s, as he felt the long malos had resulted in a wine that required more time in bottle to fully come together. Now, at nearly age ten, the 2011 remains quite vibrant and nervy, with striking citrus, floral and mineral notes laced into a racy frame. All it needs is a bit more flesh, but it’s the sort of flesh that develops with time in bottle. The 2003 Corton-Charlemagne Grand Cru is a totally different wine. It clearly carries the signatures of a torrid summer. The flavors are unabashedly ripe and tropical. Soft and curvy, the 2003 also has quite a bit more pliancy than Coche fans are used to in the Charlemagne. But you know what? The 2003 remains remarkably fresh and full of life. Those opulent signatures will accompany the 2003 for the rest of its life, and yet its balance is absolutely impeccable.

When I first tasted it, I thought the 2001 Barbaresco Riserva Rabajà was one of the very best wines Bruno Giacosa had ever made. I thought so highly of the 2001 that I bought several cases on release. Over the last few years I started to notice that some bottles weren’t showing perfectly, but I attributed that to just bad luck. Dried out and evolved, with no fruit at all, this bottle is more than bad luck, it is simply undrinkable. Pouring it down the drain is heartbreaking. Thankfully, we have better luck with the 2001 Barbaresco Asili. It just needs a few hours to open. When it does, classic Asili notes of crushed flowers, spice and red berries soar out of the decanter. As good as the 2001 is, it is not an eternal wine. I plan on drinking my remaining bottles over the next decade. I wanted a little more magic here.

Magic appears in the form of the 2009 Domaine Dujac Chambertin Grand Cru. The Chambertin has traditionally been one of the hardest Dujac wines to find, although that has changed in recent years as some large (by Burgundy standards) lots have come onto the auction market. The 2009 is just phenomenal from the moment it is opened. Ripe and racy, in the style of the year, but not at all overdone, the 2009 is majestic in its bearing. I have been fortunate to taste the 2009 a few times recently. This is about as good as it gets in wine. Wow!

I confess I had seconds of risotto. Maybe thirds, too. Don’t tell anyone. These wines really came alive with food. After tasting hundreds of wines over the week, it was nice to spend some time with a few bottles and my closest inner circle, watch a little NFL football and forget about all the stresses of 2020, even if just for a little while.