When I returned from living in Japan in the mid-1990s, I could count the number of Japanese restaurants in London on one hand. They were both intimidating and unaffordable. Thankfully, the last 25 years have witnessed a sea change in appreciation and accessibility of Japanese cuisine. Once niche and even ridiculed, it is now readily available thanks to a proliferation of YO! Sushi and Itsu branches catering to fast food junkies who want something healthier than a Big Mac, not to mention supermarkets with obligatory sushi counters staffed by anyone looking vaguely Japanese. Sushi and sashimi have become part of our regular diet.

How about the top end? London boasts three acclaimed sushi-ya where you find unstinting attention to detail, meticulously sourced ingredients, a single-digit number of covers, an experienced sushi master and a line of punters willing to splash out on the finest money can buy. You want names? The Araki, Endo at the Rotunda and Sushi Tetsu. For Vinous Table I am going to review the first two, since happenstance meant that I dined at both within a fortnight. I will visit Sushi Tetsu one day, but I particularly wanted to compare and contrast the other two and add a third, my favorite Japanese fusion restaurant in Beaune, La Lune. What should you expect? Is it worth paying the premium? How do these restaurants compare with my experiences in Japan itself? 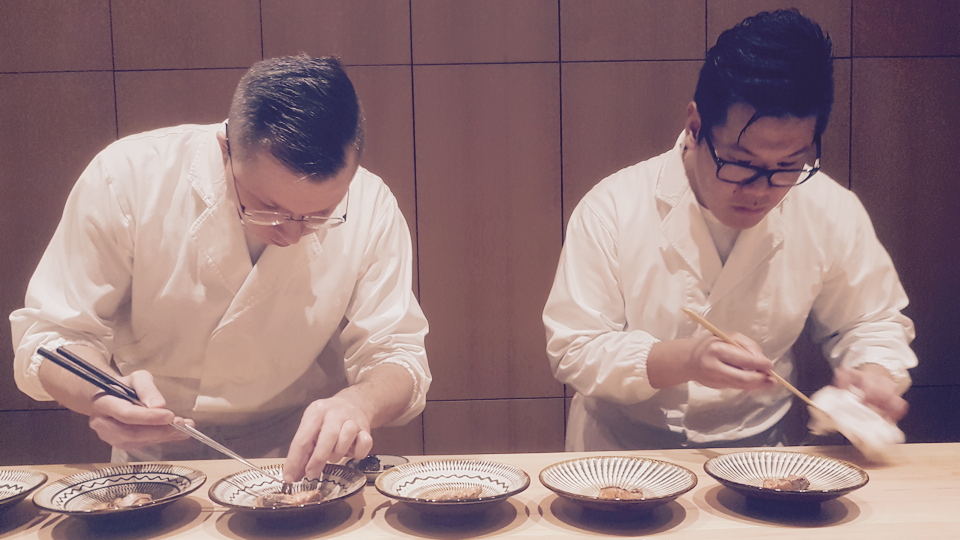 Sushi master Marty Lau, on the right. This photo conveys the concentration as he and one of his assistants prepare the dishes with their chopsticks.

Before broaching the subject of this Vinous Table, let me lay out my personal views on high-class Japanese restaurants, contentious positions that might raise the hackles of those who regard sushi masters as untouchable immortals. As you might expect, my time as a gaijin living in the heart of Tokyo in 1994/95 shapes my opinion of Japanese cuisine, rather than Japanese restaurants in the UK. I’ve sat through Jiro Dreams of Sushi. I’ve dined at exclusive sushi-ya in Tokyo, including one in the shadow of the Imperial Palace that the emperor himself covertly frequented. Of course, I enjoyed the experiences. The food was oishii. Lucky me! And yet these are not the experiences I would choose to repeat if I had the choice.

The perfect bowl of udon noodles that I encountered in Ueda; the succulent shrimp chanced upon at a deserted izakaya high up in the snowcapped Nagano mountains; the deconstructed apple crumble in an innocuous coffee bar outside Sapporo; the polystyrene plate of freshly cooked eel bought for a thousand yen in the backstreets of Tsukiji...These are my reference points, my personal apotheosis of Japanese cuisine. Paying a hefty premium to secure one of a handful of coveted seats does not give me much satisfaction, nor does the solemnity as reverent diners eat in silence. It feels like some kind of purgatory, not an act supposed to give pleasure. While I’m on a roll, tell me this: what is the skill in sourcing a fish, discarding all but the choicest cut and slicing that up, compared to a chef who has had to master an array of cooking techniques, or manages a large kitchen where preparations must be coordinated with perfect timing? To quote an article in the Japan Times from 2011: “Japanese chefs who want to earn a Michelin star just need to know how to slap a piece of raw fish on some rice.” If that’s true, then why do temples of Japanese gastronomy rank among the most expensive in the world? I’ll leave that out there for you to discuss.

First, let us examine The Araki. This is not just the most expensive Japanese restaurant in London; it is the most expensive restaurant in London. At £310 per person excluding drinks, it’s currently just fifteen quid cheaper than dinner at The Fat Duck, though sittings are limited to two hours, whereas Heston is yours for the night. A munificent friend from East Asia invited my wife and me because he wanted to try the menu before Matsuhiro Araki opened his new branch in Hong Kong. Araki had hit the headlines since vacating his position at the London branch, resulting in an arguably unfair loss of all three Michelin stars, though this did not prevent both sittings on a Sunday night in January from being full. By “full” I mean that all nine seats were taken, lined up along a single counter, apparently a gift to Araki from Japanese composer Ryuichi Sakamoto. 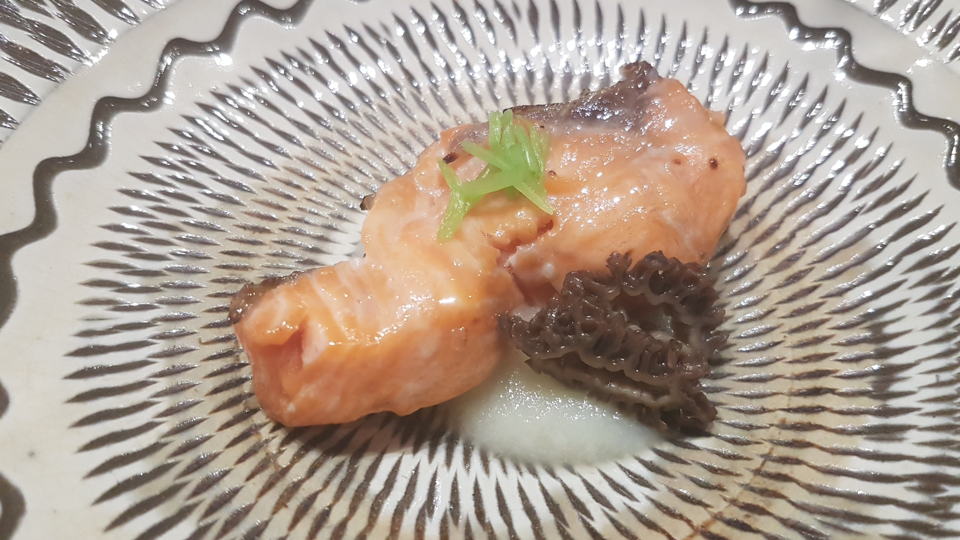 One of the best combinations was this Winchester rainbow trout cured in shio-koji with morels and white asparagus sauce.

Filling Araki-san’s shoes is sushi master Marty Lau. Lau was born and raised in the UK but speaks excellent Japanese and Cantonese. In a bizarre coincidence, his parents once ran an East Asian takeaway around the corner from my house in Guildford. Lau pursued a passion for Japanese cuisine and worked with Araki for four years before he was handed his sushi knife.

Diners at The Araki are served simultaneously, in serial courses selected by the chef, known as omakase.

Once we had settled into our seats, we were served three appetizers: hand-picked female Dorset crab with Oscietra caviar and fresh yuzu zest; soy-preserved fatty tuna with bain-marie scrambled eggs and white Italian truffles; and a grilled Winchester rainbow trout cured in shio-koji with morels and white asparagus sauce. The pick of the three was probably the crab: a tightly coiled spring of flavor that burst open in the mouth, the caviar clearly well sourced and marrying perfectly with the crab. 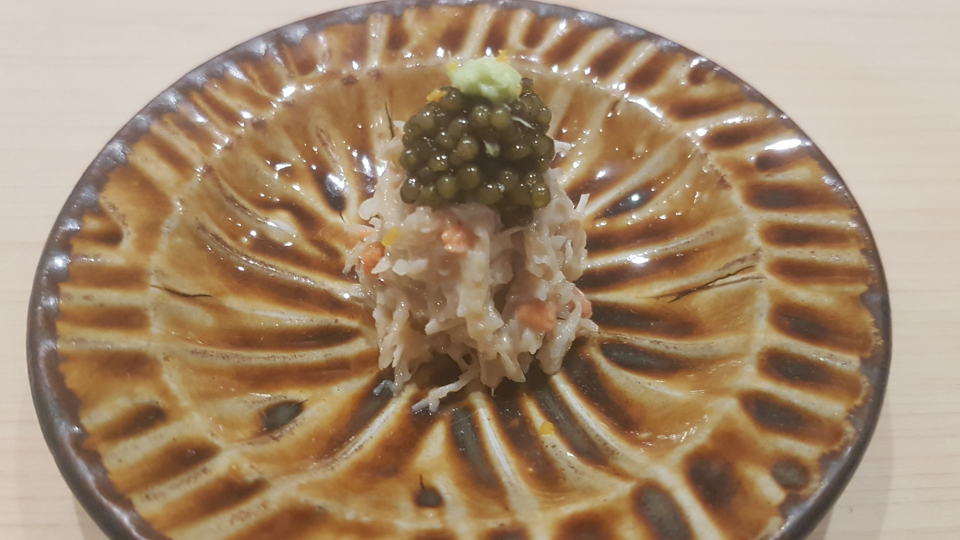 Beautiful traditional Japanese dishes were used to serve any courses that were not placed in your hand; this the crab with caviar.

The fatty tuna with white Italian truffles is a controversial dish. Let me explain. Purists contend that white truffles, having nothing to do with Japanese cuisine, are an interloping delicacy. They were liberally shaved onto the fatty tuna, as one would hope given the forthcoming bill, yet a purist would argue that this not only risks obfuscating the taste of the prized fatty tuna, but is merely an otiose ingredient to justify the cost. 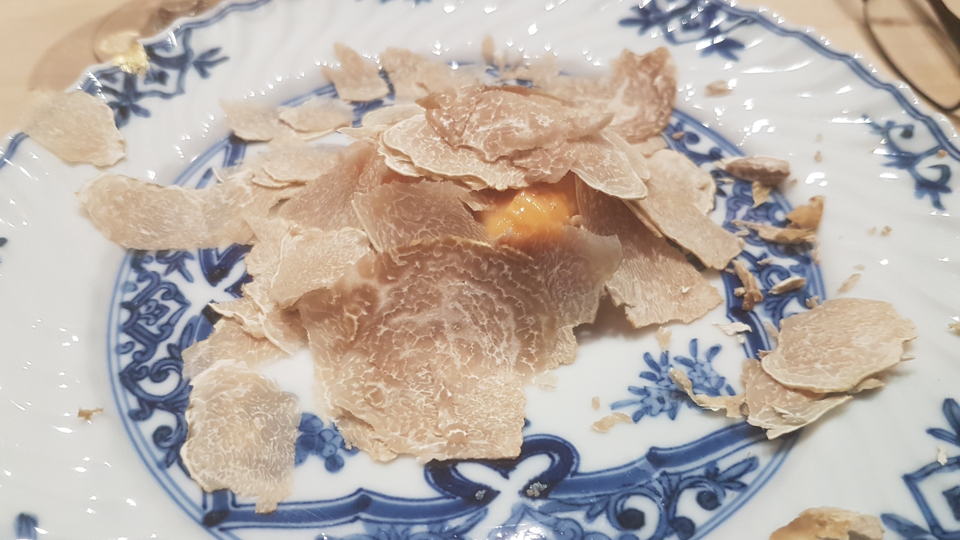 The controversial fatty tuna served with generous shavings of white truffle. Too much of a good thing?

I have to side with the purists in this case. The combination didn’t quite work for me, and I resisted using my chopsticks to dig my way through the truffle so that I could enjoy the sushi on its own. I just prefer my white truffles sprinkled upon a steaming bowl of fresh pasta. Likewise, the combination of rainbow trout and morels did not quite gel, and I would have preferred the trout tout seule. 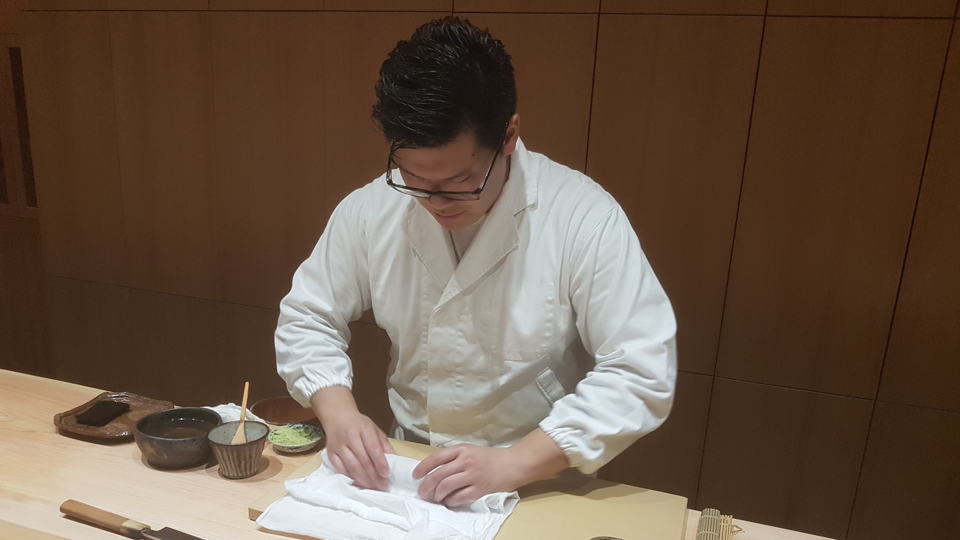 Marty Lau focused on rolling sushi that is served directly into the palm of you hand, flipped over so that the fish will contact your tongue.

Next came a steady stream of sushi. Lau told me the sushi was prepared in much the same way as chefs preserved fish before refrigeration: by using vinegar. The sushi is served in the traditional manner, sliced and constructed in front of you and placed in your hand. We were instructed to turn the sushi upside down, so that the fish makes direct contact the tongue, and swallow it whole. Whereas some of the top sushi restaurants source their fish from Japan and import them at considerable cost to New York or Hong Kong, here fish is sourced from Spain, Scotland or the Cornish coast. The quality was outstanding, as I would expect at this level, and as good as the finest encountered in Japan. My pick of these courses was the pickled Cornish mackerel bo sushi with shiso and sesame. Also notable were the Isle of Skye steamed hand-pulled scallops with smoked Exmoor caviar, perfectly cooked to a melt-in-your-mouth texture, the caviar lending a vital tang and all the flavors in absolute harmony. 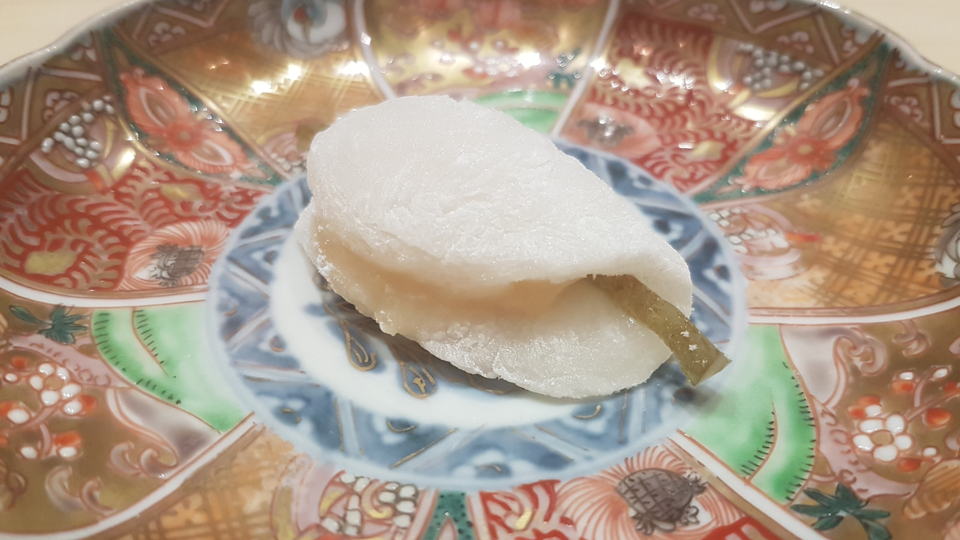 Japanese children love the sweet rice cake known as mochi, especially when traditionally made by pounding the dough with a large wooden hammer, called an akine, until it has the right consistency. There were no large hammers, or children, on this evening.

There were two desserts based on traditional Japanese recipes. The atsuyaki tamago came as a miniature block, perfectly cooked and with a lovely umami sensation. I also adored the hanabira mochi, which had just the right amount of sweetness.

My host brought two sake wines for us to try. The first is controversial. I took a photograph of the label and translated the name of the producer when I returned home. It was then that I discovered it was a Juyondai from Takagi Shuzo. This brand enjoys a cult following in Japan, where bottles sell for considerable sums, if you can even locate one. Premium examples seem to be shrouded in mystery, and of course this only heightens demand. Last year, a wine writer traveled to Japan to investigate Juyondai and was met with a wall of secrecy and a commercial brewery with large exterior tanks that cast doubt upon the brand’s artisan credentials, begging the question of how they produced such limited cuvées. I was unable to identify this evening’s specimen with certainty, as the kanji in the photo is a little blurred, but I believe it is Junmai Ginjo Sake Mirai. Because of the backstory, I will simply say that I found it to be pleasant and sweeter than I am accustomed to, though clean and enjoyable, and note that I did prefer the second sake. The Kikuhime Kukurihime Daiginjo Sake is made from Yamadanishiki rice from Yokawa with a milling ratio of 50% and aged for 10 years. This has an appealing nose that was sharper and slightly nuttier than the first sake wine. The palate had a pleasant acidic bite and bitterness that combined supremely well with the sushi, just taking an edge off the richness, and the finish was comparatively dry and slightly smoky. 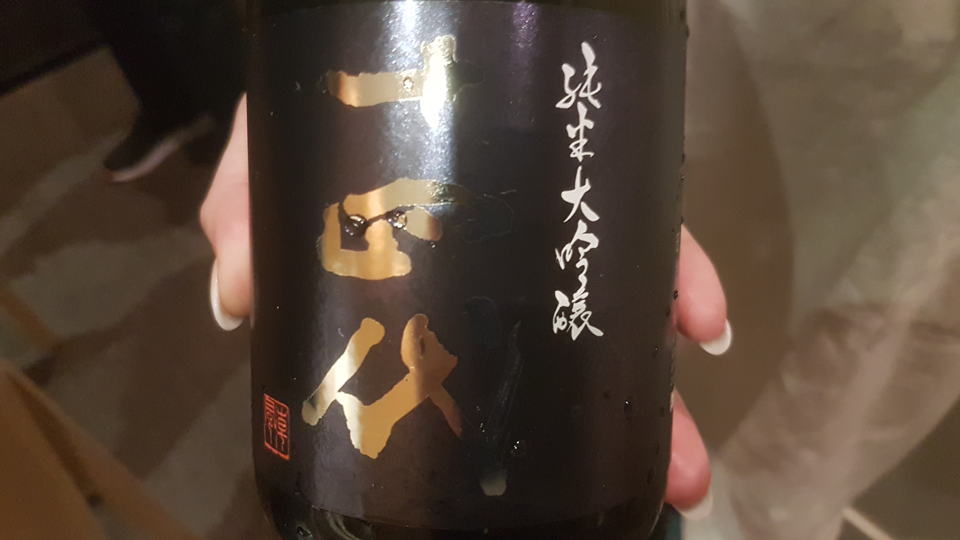 The clock struck eight and the nine customers were thanked for their custom, handed their bills and politely asked to vacate promptly. One hundred and twenty minutes. So, was it worth it? Well, are you paying?

Don’t get me wrong: The Araki served a delicious meal and I must commend Lau for being chatty and personable when other sushi masters can either act imperious or ramble on so much that you feel you’re attending a lecture rather than dining out. This was probably the most expensive Japanese meal I have ever eaten, though not necessarily the best, and I expected that coming in. If customers are happy to pay an arm and a leg for this level of Japanese cuisine, that’s fine, though personally I would have spent the money for a plane ticket to Tokyo and eaten at any of the places I mentioned earlier.

Next, I visit another top-notch sushi restaurant, Endo at the Rotunda – and yes, expect some more shaved truffles...

This article was written and submitted before COVID-19.