Dorset clams in a saffron broth and New Jersey potatoes

Confit of lamb with dill and sour cream sauce and cucumber

Chiswick is a posh bit of London. Thanks to its ideal location, you can easily catch a taxi into the West End or cycle out to Richmond Park to watch the frolicking deer. Everyone in Chiswick looks as if they have done well, though not obscenely well enough to call Notting Hill home. Its streets are filled with actors, yummy mummies, French au pairs and ambitious city workers, and its most reputed restaurant is a regular haunt, one already reviewed for Vinous Table: La Trompette. Returning after lockdown, I wanted to try something different, and so I booked a table at The Silver Birch, which had the misfortune to open between lockdowns last year. Finally, Silver Birch can open their doors once again.

Located on Chiswick’s main street, The Silver Birch is a local bistro that aspires to decent grub rather than haute cuisine. The head chef is Canadian Kimberly Hernandez, who trained at Dinner by Heston. I often find this tier of restaurant to be the least obliging apropos of BYO, and to be honest, with the hospitality sector in such a precarious state, it is not something to insist upon. Nevertheless, they were happy to accept reasonable corkage, and following etiquette, I also ordered from the list. 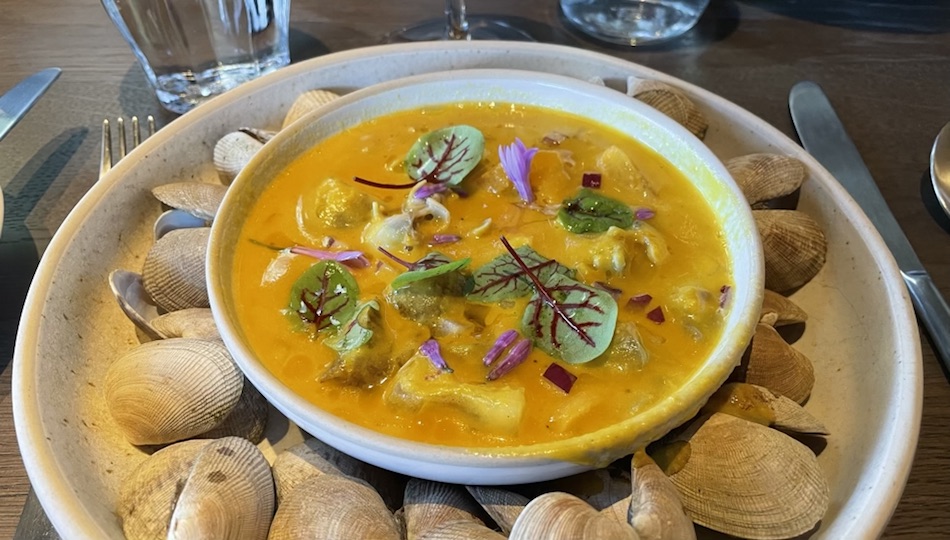 Dorset clams in a saffron broth and New Jersey potatoes

My starter of Dorset clams in a saffron broth and New Jersey potatoes was fine, but no show-stopper. The clams were fresh and a touch salty, but the broth needed a slightly thicker texture and maybe a pinch more seasoning. 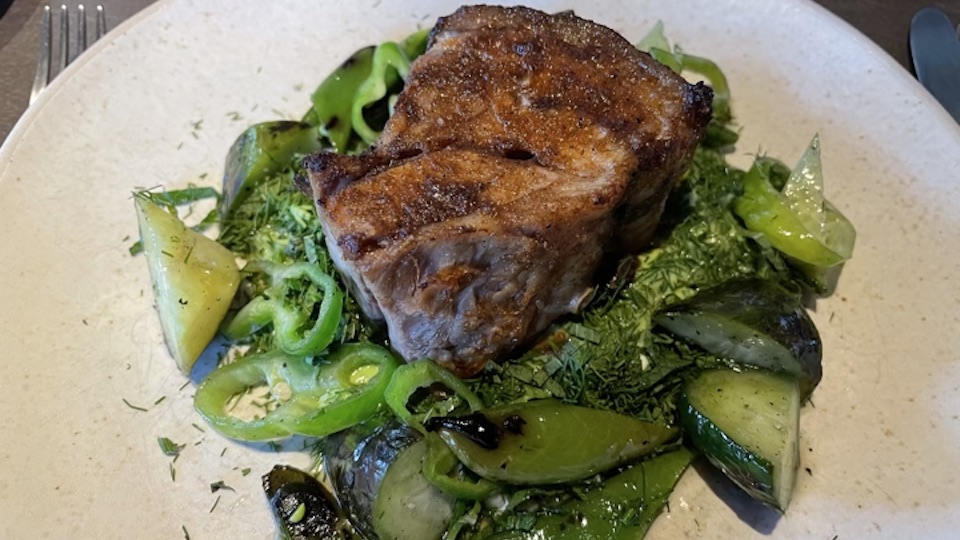 Confit of lamb with dill and sour cream sauce and cucumber

For the main course, I treated myself to red meat. The lamb was unfussy: a smidgen overcooked, though it melted off the bone nicely. It came with a generous serving of dill and sour cream sauce. Dill is not an herb I associate with lamb, but it worked well; less so the chunks of cucumber, which belonged in a salad. Maybe I would have liked this served a bit warmer on my plate, but I did not complain. Our waiter confessed that the kitchen team is a bit rusty after being furloughed. They should soon get back in the swing of it. 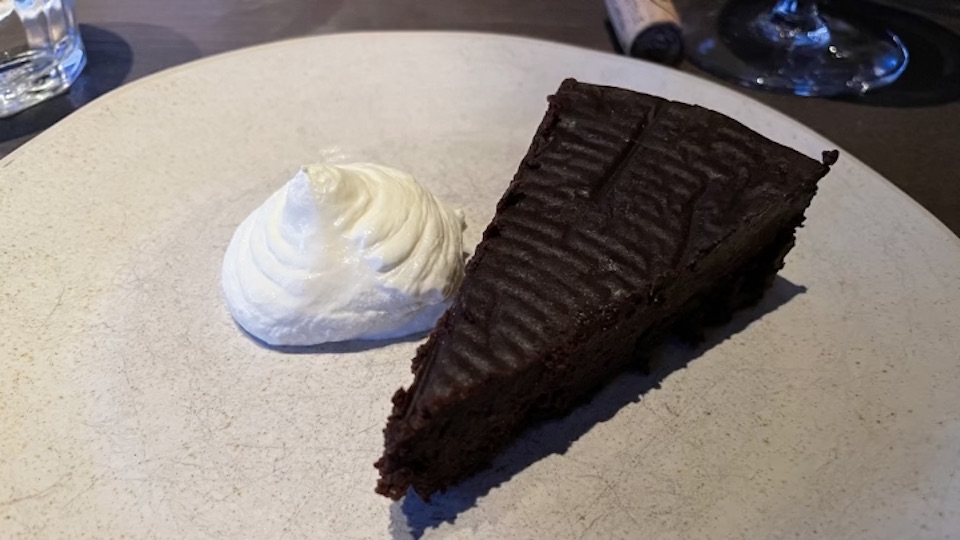 To finish, a flourless chocolate cake was spot on, which is no surprise, as Hernandez was previously head pastry chef. This highlight of the dinner was not too heavy and had the right saltiness to ensure that the slice was devoured in milliseconds. 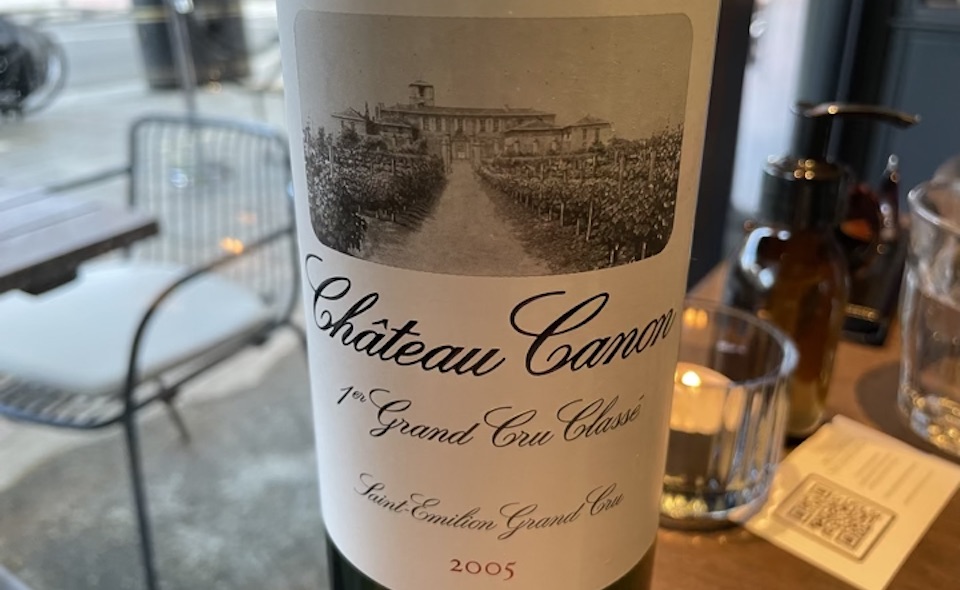 For wine, we began with a 2018 Chardonnay Yarra Valley from Innocent Bystander. This is simple but fresh on the nose, offering scents of orange pith, melon and yellow plums. The palate is, again, nothing complex, but it’s underpinned by fine acidity and a slightly malic finish. The 2005 Canon is an absolute gem and, like many 2005s, is beginning to shed its tannins and become more approachable and terroir-driven. Red berry fruit, undergrowth, hints of singed leather and warm gravel manifest on the nose, plus just a touch of hot bricks in the background, and perhaps terra-cotta. The palate is not muscular but shows fine backbone. The tannins, having softened in the last couple of years, frame a mélange of red and black fruit intermixed with bay leaf and clove. Kudos to winemaker John Kolasa, who oversaw this vintage and was instrumental in the estate’s rejuvenation.

Silver Birch has potential, yet there is definitely room for improvement. To be honest, the cooking was rusty around the edges, but that is true for many places, not least because so much young talent fled these shores either due to Brexit or COVID. A little tweaking would not go amiss. The service was friendly, and they had made a great effort to keep diners socially distanced while maintaining a lively, parochial ambiance. Prices are reasonable for this part of London and accommodating the occasional BYOB is a smart move. This was a lowkey reintroduction to the restaurant dining scene post-lockdown and I could not compare the simplicity of the menu here with the culinary brilliance displayed the following day at SO|LA. It was just a pleasure to be back in a restaurant, meeting friends and sharing dinner and wine.