The Wellington Arms, near Baughurst, UK 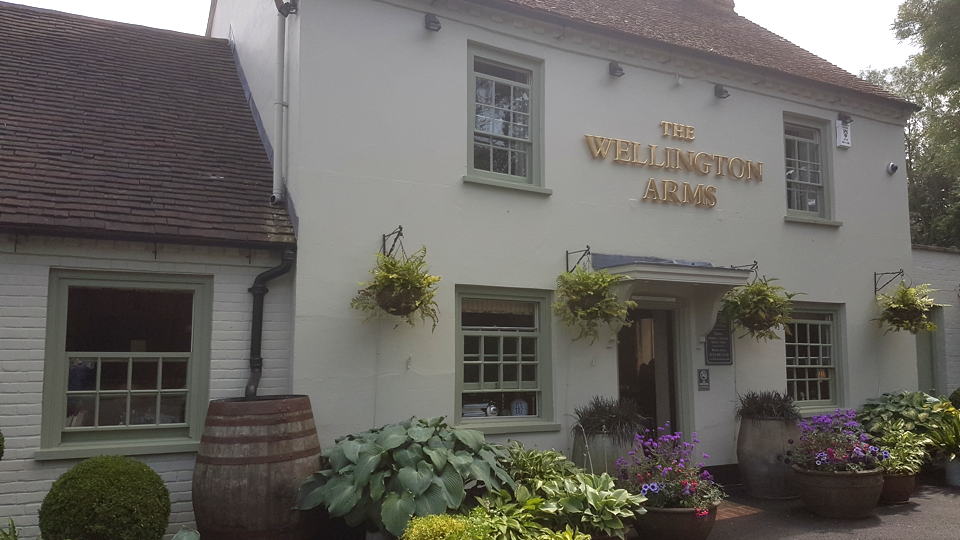 The facade of The Wellington Arms

My youth was misspent in my local public house, The Grand. It was the fulcrum of Leigh-on-Sea, and my home away from home. Wander in alone and you could bank on bumping into a fellow idler within one of the three bars. It had its failings; you could barely see your hand in front of your face through the Marlboro fog, and your feet stuck to the carpet after decades of beer spillage. The Grand was a Victorian rake, a bit scuffed around the edges, but I accreted countless precious memories within its red ochre walls. Like many pubs, last orders were called and the windows boarded up, and Leigh-on-Sea lost something irretrievable. The Grand fell into such disrepair that the wrecking ball was just one swing away. A celebrity nobody from reality TV drivel “The Only Way Is Essex” eventually bought the decaying building, and The Grand is currently being reborn as a.n.other luxury spa hotel, a fate that I must accept as unsavoury but better than rubble and dust.

The demise of the British boozer coincided not with the sudden rise of luxury spas like The Grand, but with the proliferation of the gastropub. The public no longer desired to waste an evening downing pints and smoking fags with their mates, preferring to scroll through their Facebook timeline pretending to know people. But they still wanted to eat out. So clear out the kegs, install a kitchen and a young chef who can fry a hamburger, and away you go. There are thousands of gastropubs dotted across the country, rural destinations for families escaping urban claustrophobia and wishing to eat something wholesome. They range from the abominable to the sublime. 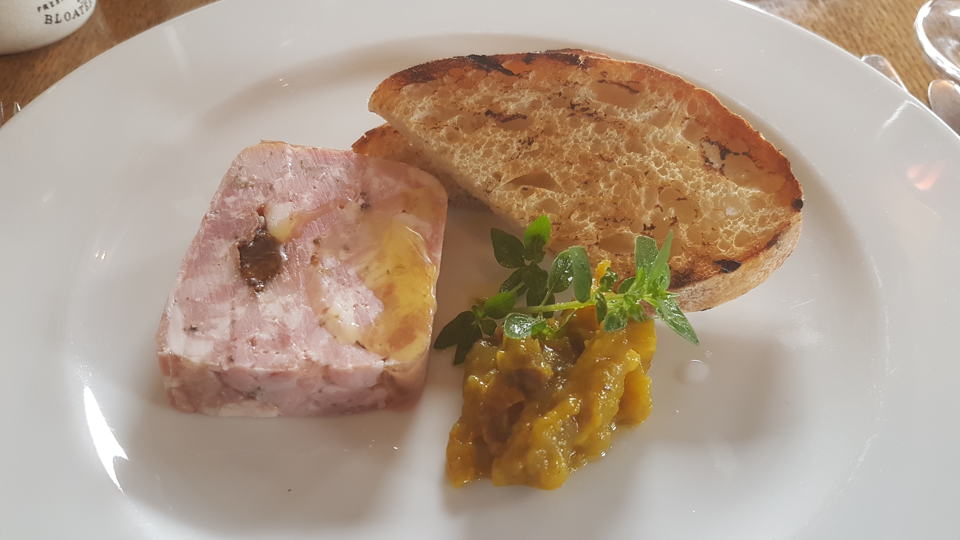 So where does the Wellington Arms fit into the sliding scale of gastropub quality? The latter. In fact, let me state for the record that the Wellington Arms must be the best gastropub in the UK. It is probably a disservice to call it a gastropub, because the quality of food is never less than outstanding. Rarely do I call something flawless, but it is everything you could desire in a gastropub. The duo that bought the pub in 2005 – Jason King, in the kitchen, and Simon Page, front of house – take everything to perfection.

Readers should be aware there are two other “Wellington Arms” located in the same area, so please make note of the website URL at the top of this article. The Wellington Arms in question here overlooks a leafy country lane just north of Basingstoke, within earshot of hymns from St. Stephen’s Church nearby. It is a stone’s throw from the main offices of merchant Berry Brothers & Rudd – indeed, it was a BBR bod who introduced me a few years ago. The bijou, picturesque two-storey 18th-century hunting lodge is surrounded by planters of shrubbery that were being fastidiously pampered when I visited, and to the rear lies an immaculately maintained garden, as well as converted outbuildings housing half-a-dozen rooms for those wishing to stay the night. Look around and you see fruit trees, polytunnels of vegetables and herbs, a herd of Jacob sheep grazing in a neighbouring meadow; you might hear buzzing from an apiary. Here at the Wellington Arms, nearly all the vegetables, herbs and fruit are grown a few metres from where you dine. The interior maintains the ambiance of a public house, fortunately without the cigarette smoke and sticky carpet. The decor perfectly evokes the English countryside with its Farrow & Ball pastel shades, solid oak beams, specials chalked on a blackboard and solid antique varnished tables. Just like the traditional pub, a gastropub must make you immediately feel at home. The Wellington Arms does this effortlessly, wrapping its arms around you as you enter and saying “welcome.” 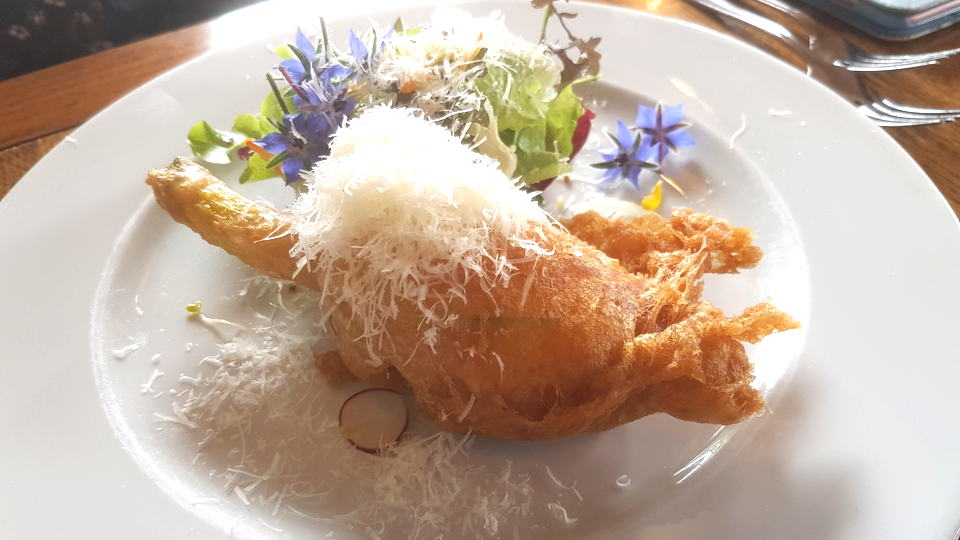 The outstanding food puts many of London’s high-falutin’ restaurants to shame. There are no frills and no fancy amuse-bouches. This is straightforward delicious food of the highest order. I lunched here twice in recent weeks, the first time when admittedly I was not in the finest fettle, though I was so impressed that I vowed to return. On both occasions the standard of cooking was exemplary. I started with a rabbit, pheasant and pork terrine with green onion chutney and charred sourdough bread. The consistency of the moderately sized terrine was superb and without the fatty morsels you sometimes find.

An even better starter was the baked courgette flower with ricotta and Parmesan. Maybe the batter was a tad superfluous to requirements, but the courgette flower was just so wispy and light that you could imagine it floating away. 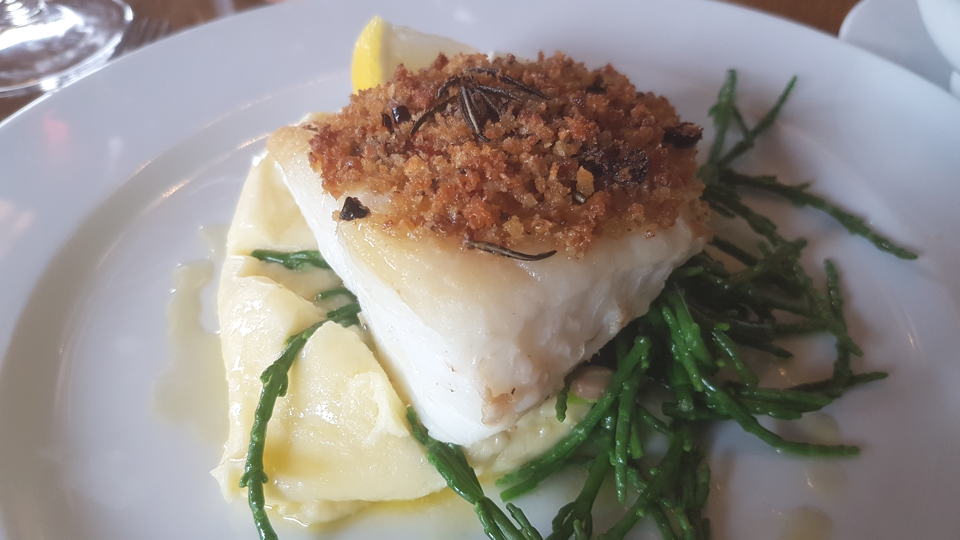 One of two supremely well-executed fish, first the Brixham cod on my visit earlier in the year

For the main, I chose plaice cooked on the bone with capers and Jersey Royals with a side order of spinach. The plaice was perfectly cooked and seasoned with dill, and a little meatier and more stomach-filling than I expected. On the previous occasion, my Brixham cod with a preserved lemon and olive crust, served with Anya potatoes, was faultless. For pudding, there was no choice but to put my diet to one side and order the sponge bathed in piping-hot custard and topped with crystallised ginger. It oozed deliciousness and was devoured with childlike relish.

Before moving on to the wine, I must mention the price of the food. My set three-course lunch cost a measly £20.00 – outrageously great value even if the standard of cooking had been half of what it was. 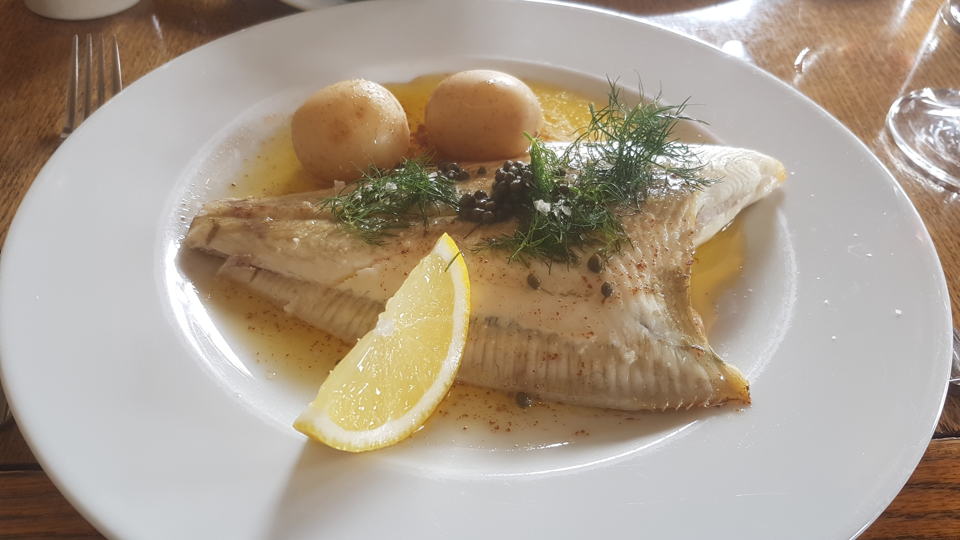 The second of the two fish, the plaice on my return visit

Now, at this point I would expect to write that everything about the Wellington Arms is perfect except for the wines, for this is where most establishments stumble. That is not the case here. The main list is diverse, well chosen and full of interesting bottles. There is also a “Rare Wine” list with – you might need to sit down for this – well-priced bottles of mature Burgundy. Yes, you read that correctly.

I prevaricated over a 2009 Dugat-Py but could not resist a 2004 Volnay Vendange Sélectionné from Domaine Michel Lafarge, decently priced at £80.00. Showing clear signs of maturity, it fortunately displays no signs of those “green meanies” on the nose. It is quite gamy and ferrous, perhaps missing some intensity, especially as it aerates in the glass. The palate is medium-bodied with rustic tannins and quite sharp acidity, featuring (again) quite ferrous red fruit mixed with tobacco and sage. It just sagged a little toward the beet-tinged finish, though I observed a little more cohesion after taking the remainder of the bottle home to polish off that evening. 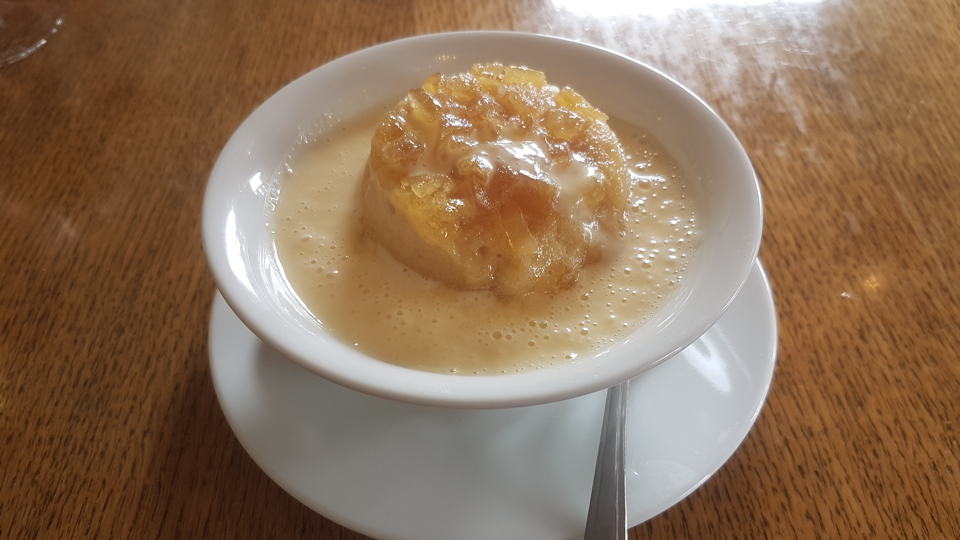 Yes, this sponge and custard really was as delicious as it looks

The Wellington Arms does just about everything perfectly, and its walls are predictably festooned with numerous awards and rosettes. Having dined there several times, each time I depart even more convinced that it is the benchmark against which gastropubs should be measured. The reality is that none have even come close. I would recommend booking a room for the night, since the Wellington Arms is located in the middle of nowhere. Otherwise, enjoy a lunch; if the weather allows, reserve an outside table and soak in the rural air. 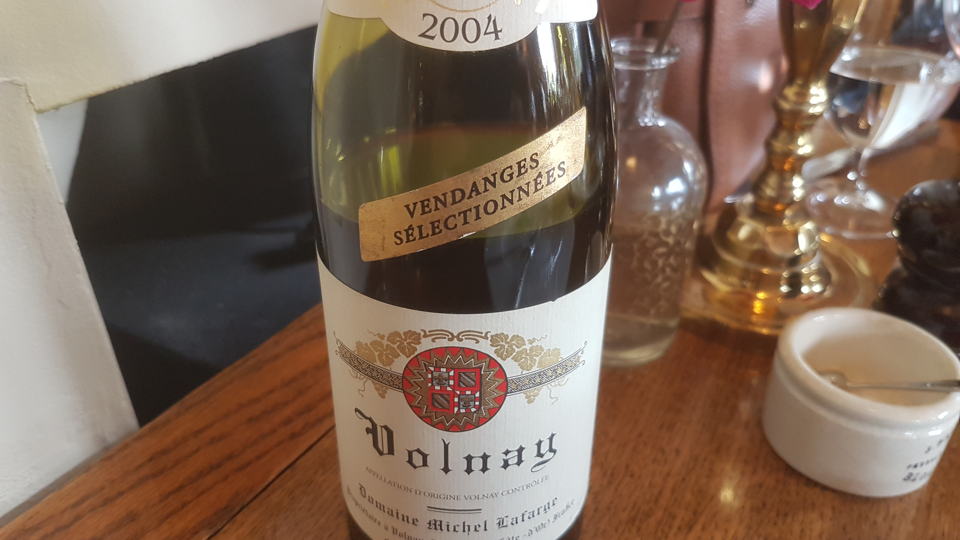 A few years ago, this was a boozer drawing its last breath. King and Page gave the Wellington Arms a new lease on life, reinventing it as a thriving restaurant, not a gastropub, that is a joy to visit every time.

If only the same could be said of my beloved local, The Grand. If only...