I never understood our method of rooting out witches back in ye olde Merry England. Surely all your friendly witch-finder general had to do was line up cackling suspects and, in his best evil Vincent Price voice, accuse the one wearing a large pointed hat, astride a hovering broomstick with a black cat riding pillion. Simple. Instead, we had the cruel technique of gathering yokels together, binding the suspects’ limbs and throwing them into a pond. If they bobbed to the surface, that obviously confirmed witchcraft and they were burned at the stake. If they drowned, oops-a-daisy, they were innocent and free to go on their merry way. 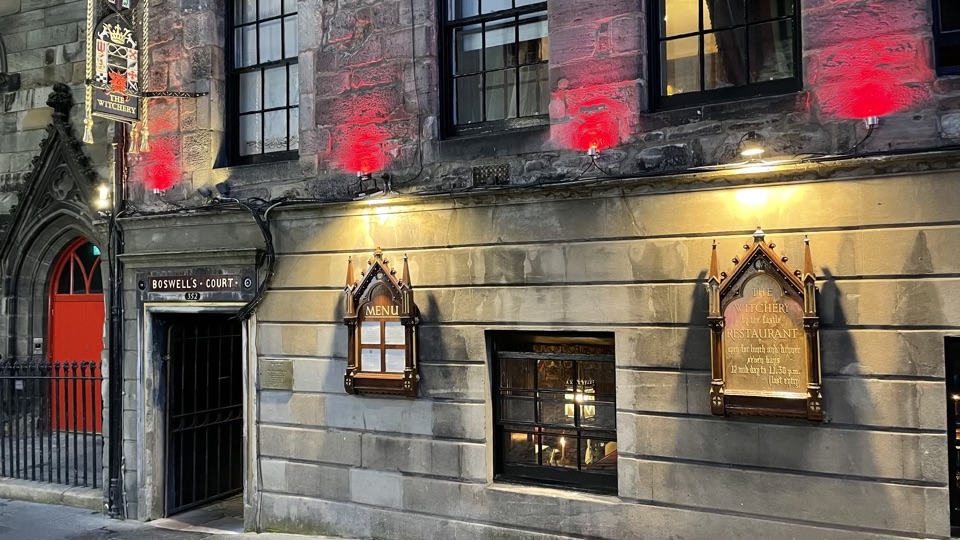 This brings me to The Witchery in Edinburgh, which takes its name from the fact that in the 16th and 17th centuries, an estimated 4,000 women and men were burned at the stake outside on the Royal Mile. How we revel in our cruel history. Situated in the heart of Edinburgh just 100 meters down from the famous castle, let’s just say they can never complain about low footfall. The building, Boswell Court, served for centuries as an administrative headquarters – until 1979, when restaurateur and hotelier James Thomson turned it into a high-end restaurant, expanding in 1990 with an al fresco dining area called “The Secret Garden.” 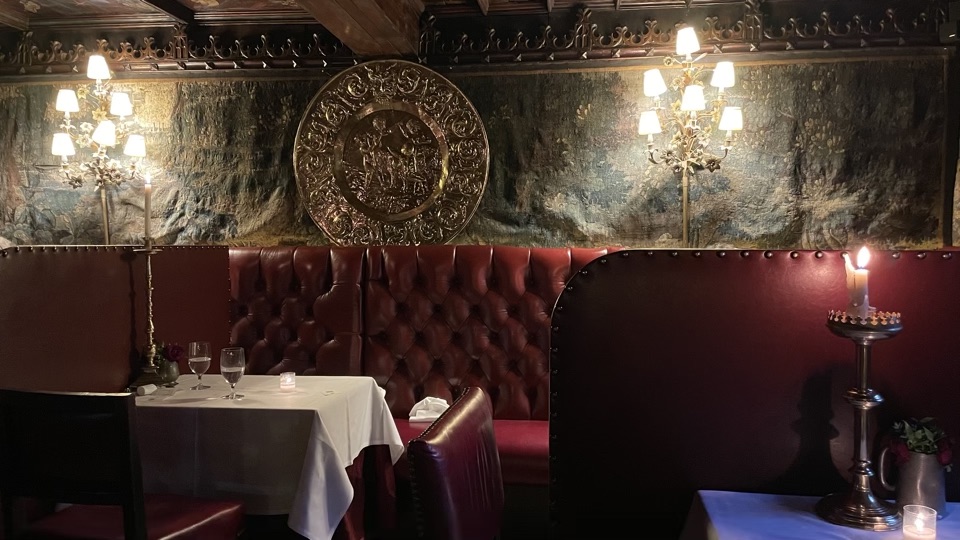 The setting is half the fun. The Gothic building dates back to the 1500s, and its tenebrous baroque interior is a wonder to behold. Straight out of a Hammer horror movie, the walls are made from 17th-century carved oak panelling rescued from a fire at St. Giles Cathedral and a château in Burgundy. Timeworn tapestries hang on the walls and obligatory church-like candles light every table; overlooking ours was an oversized bust of the grinning devil himself. It’s all very theatrical, and I wondered whether it was more of a tourist trap, despite advertising that it serves the best of Scottish produce. Then I heard that the 900-bin wine list was worth checking out, and so I booked a table. 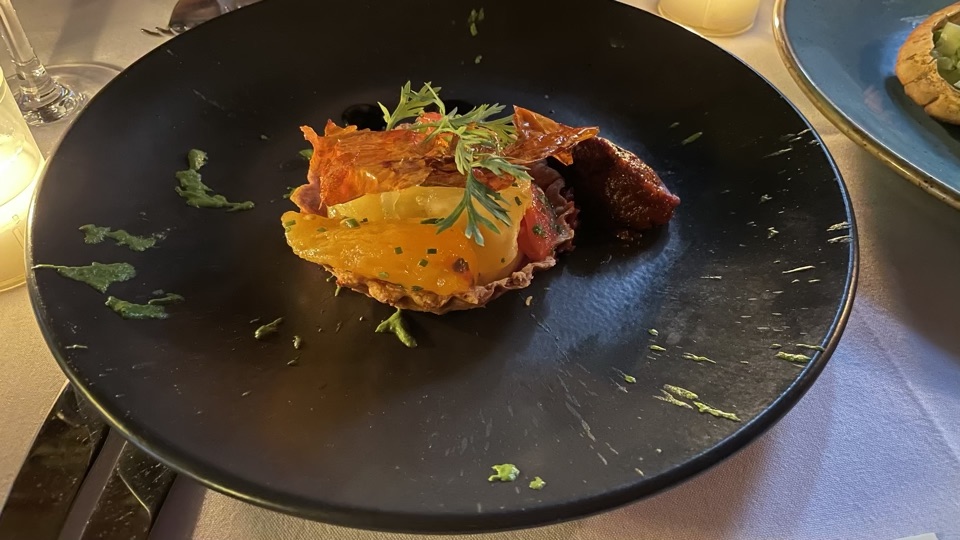 The menu offers various cuts of steak, although they were quite expensive, and I wasn’t in a carnivorous mood.

So I looked elsewhere on the menu. We shared two starters. The Anstruther crab salad with pickled cucumber and shellfish aioli was a bit underwhelming. I am so often disappointed with crab dishes (except the famous homemade crab cakes rustled up by Robert Parker). Crabs look amazing and taste delicious, but too often they don’t deliver on the plate – even here, smeared with a line of caviar and served in the shell. The dish did not jell and was hampered by too much iceberg lettuce. The crab was outplayed by the Anster shortcrust tart with tomato jam and yellow tomatoes from the Isle of Wight, served with Anster custard. The tomatoes oozed with flavor and delivered Mediterranean-like sweetness, lifted by the judicious smear of custard, and the tart itself was light and fluffy. My only complaint is that it could have been an inch larger in diameter. 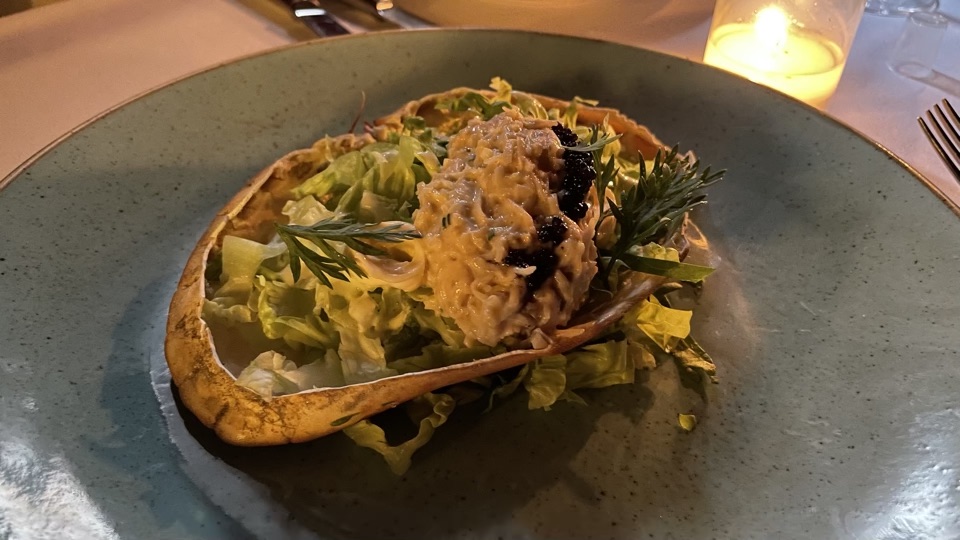 For the main course, I chose the grilled spring lamb and confit of neck fillet with a small tartlet containing wild garlic, courgette and pea. Again, the tartlet was tiny but delicious. The lamb was, again, smaller than I would have liked, but it was top-notch, tender and packed with flavour – so delicious that it actually benefited from no seasoning or accompanying sauces. We shared a bouillabaisse of monkfish, John Dory and red mullet with steamed alexanders. I must knock points off because the fish was slightly overcooked, denuding the bouillabaisse of flavour and moisture. Shame, because the quality of fish was fine (as it should be, coming from nearby cold waters). 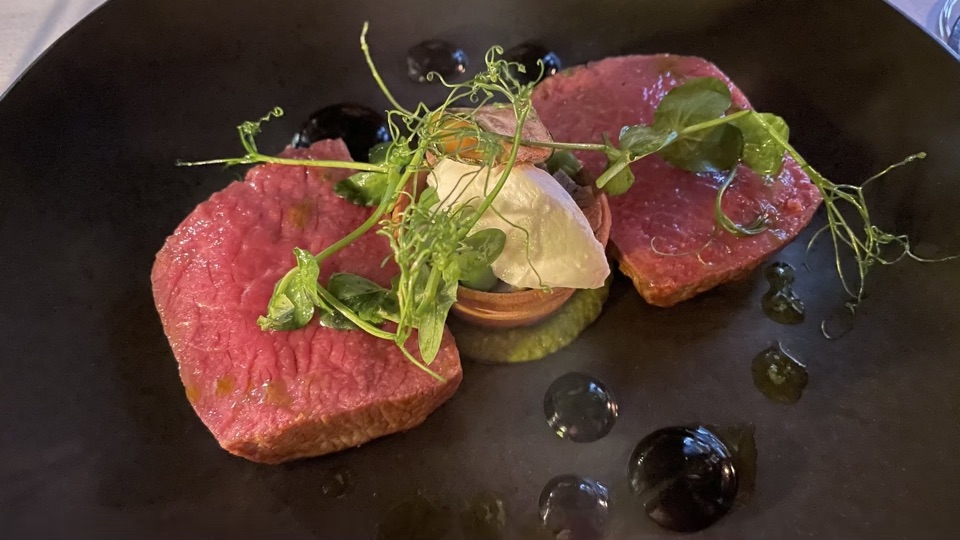 Finally, the dessert selection included chocolate tart, mille-feuille and strawberry and pistachio trifle. The tart was, yet again, miniature in size but delivered perfect bitterness and salinity, while the more-ish mille-feuille was creamy but not too heavy. Generally, they were perfectly capable though not spectacular desserts. 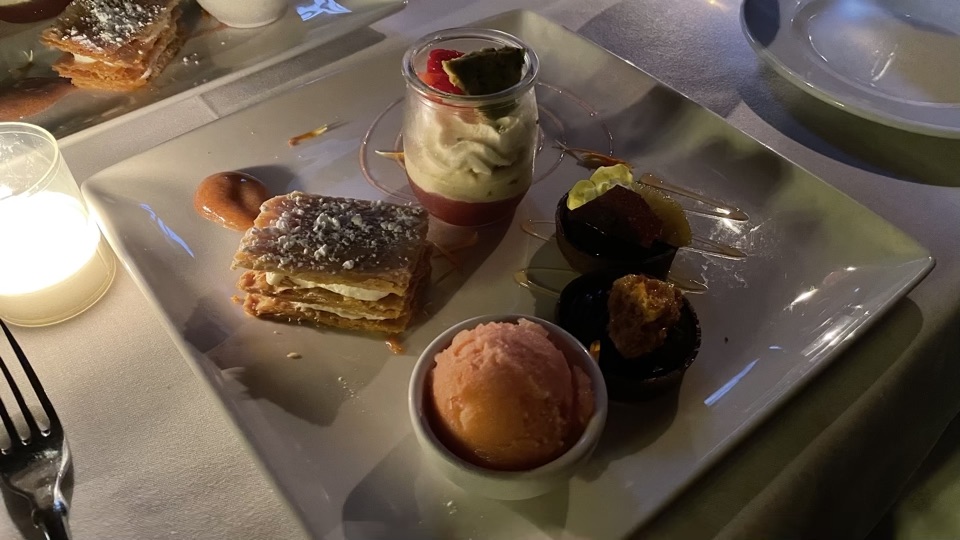 The wine list at The Witchery is impressive, and not just because of the big names. Sure, there is Petrus and DRC on the list, but I wasn’t about to blow the budget. It was refreshing to see bottles with decent maturity, with plenty of offerings from the Eighties and Nineties. The Italian selection is particularly strong, though in the end, I could not resist a Portuguese white, the 2016 Redoma Branco Douro from Niepoort. It’s a brilliant wine from the most famous “Dirk” in Portugal, a blend of 65- to 85-year-old Rabigato, Códega, Viosinho, Donzelinho, Dorinto and a field blend of others grown on schist soil, fermented in oak barrels and bottled after nine months. Aromatic on the nose, it offers enticing scents of wild peaches, brioche and chamomile, all beautifully defined. Where the palate could have been heavy, instead it was nimble and tensile, delivering perfectly judged acidity that effortlessly counterbalanced the weight and concentration. This was a hot summer in the Douro, and yet, the alcohol comes in at a cool 12 degrees only. It was a wine that made me wish I could taste the underrated Portuguese wines more regularly. 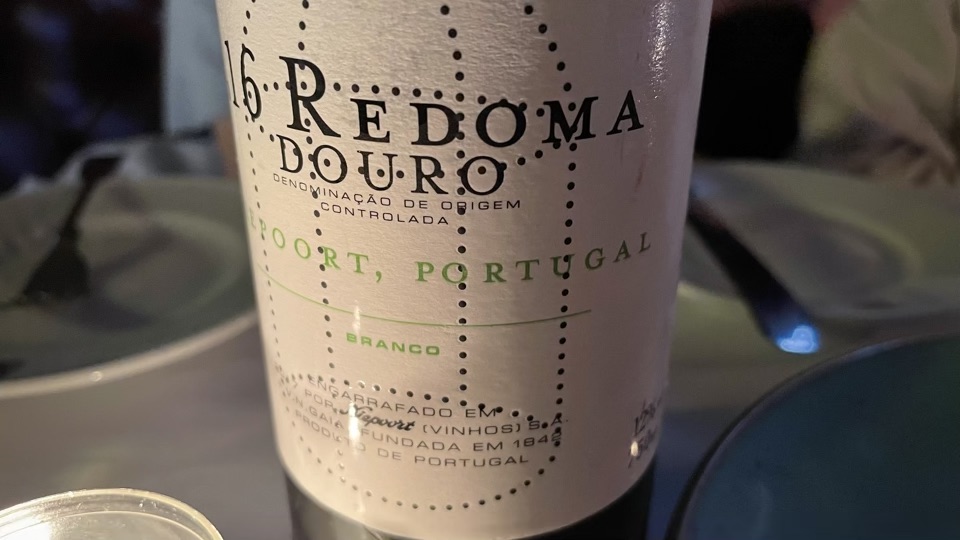 The Witchery was my first dinner in the Scottish capital, which, as I was about to discover, is blessed with a thriving dining culture. The Witchery’s setting is novel and quite wonderful, and the service was excellent. However, the were a couple of lapses with the cooking and – my main complaint – the portion sizes were mean, especially given that this is not a inexpensive restaurant. It’s certainly a place to go for a romantic meal or if you are into history, and the wine list is definitely worth checking out. It’s a pity that the standard of cooking did not match the setting and was soon surpassed by other restaurants later in the week. You will read all about them in forthcoming tartan-colored Vinous Tables.