One of the great virtues of Burgundy, and one of the great frustrations, is its mercurial nature, its innate ability to shape-shift like Bowie through the Seventies as soon as the cork goes “pop.” Pinot Noir is infamously sensitive, and that sensitivity translates across into the wine. Exposure to air is its signal to shuffle its deck of aromatics and flavors like a seasoned Las Vegas croupier or, with equal sleight of hand, gain density from the ether. The mass of the wine, its shape in the wine glass and the atmosphere of the surroundings all mean that there is an infinite number of variations on how a bottle shows on any given occasion. Because of this, spending quality time with Burgundy is vital. Alas, rarity and exorbitant prices prevent many people from getting within a sniff of its top wines, both figuratively and literally. 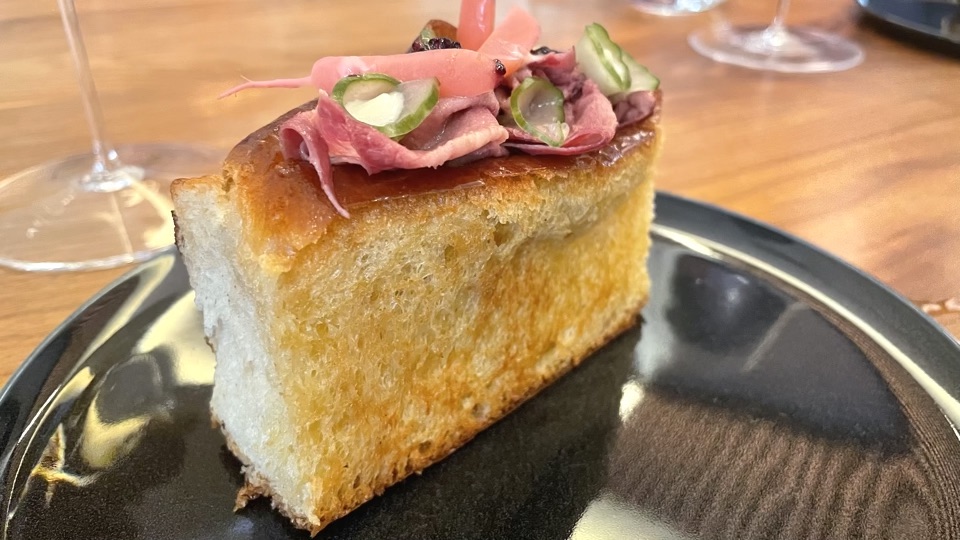 This private dinner at Trivet was an opportunity to get acquainted with some very special bottles of Burgundy. It marked my first return since visiting the restaurant just after its opening in 2018, whereupon it formed one of my first Vinous Tables. Former Fat Duck head sommelier and co-owner Isa Bal welcomed us with a beaming smile (I might have taken that as a given, since he was wearing a mask), while Johnny Lake, Fat Duck’s former group executive chef, ensured that everything was running smoothly from the open kitchen. The main event was to be five 2007 Grand Crus that I could compare over an entire evening as they jostled for position, trying to win the most approval by the end of the evening. 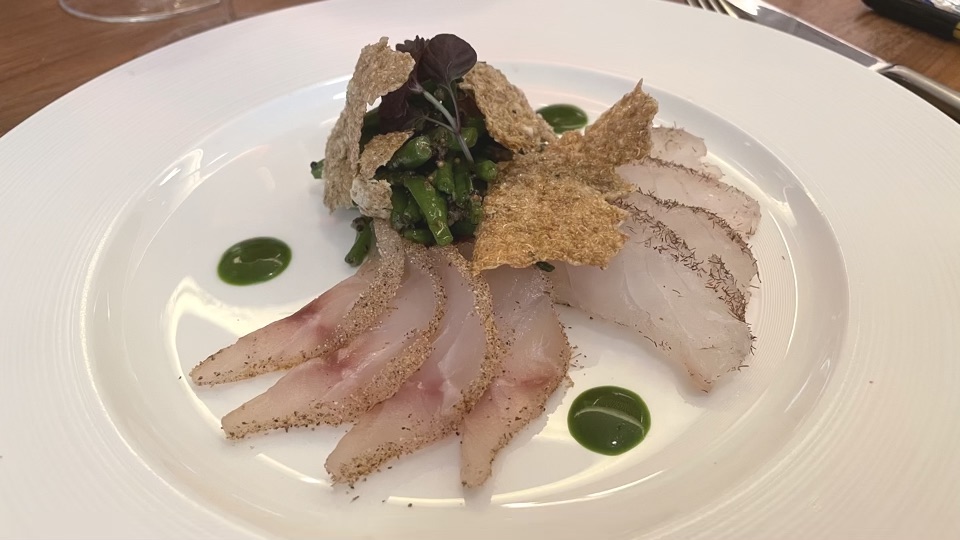 Trivet’s menu is deceptively simple insofar as the offerings are nuanced, their complexity discreet rather than engineered to be obvious. The cheekily titled “hot tongue bun” consisted of a medium-sized bun topped with braised Sussex wagyu tongue, anchovy mayonnaise and pickles. The latter two ingredients lent acidity and tanginess that perhaps slightly obscured the wagyu, though the bun itself had perfect consistency and moisture.

I opted for the cured sea bass and cod with toasted barley, green beans, mustard seeds and quinoa. There was a nod to Japan here, the mustard seeds lending just the right amount of spice and the cod, actually a little more flavorsome than the sea bass. 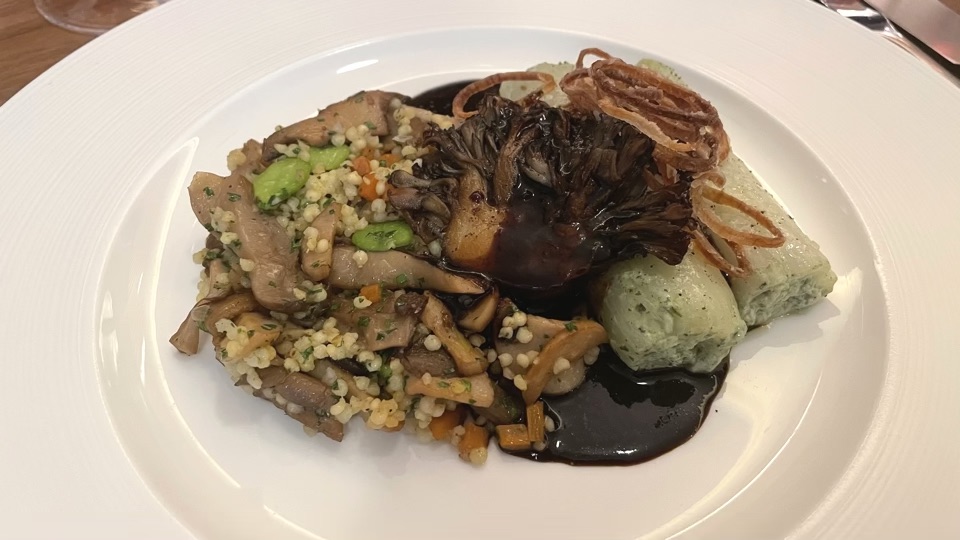 These days I am choosing vegetarian dishes more frequently, not only for health reasons, but because I find that they often marry with wines better than meat and sauces. The leek cannelloni with ricotta and nettle, oyster mushroom and fava bean ragù was absolutely delicious. This was the second leek-based dish that has wowed me in recent weeks, following on from that wonderful burnt leek at Climpson X Brat. The ingredients here were beautifully combined and you could eat to your heart’s content without feeling overly full. 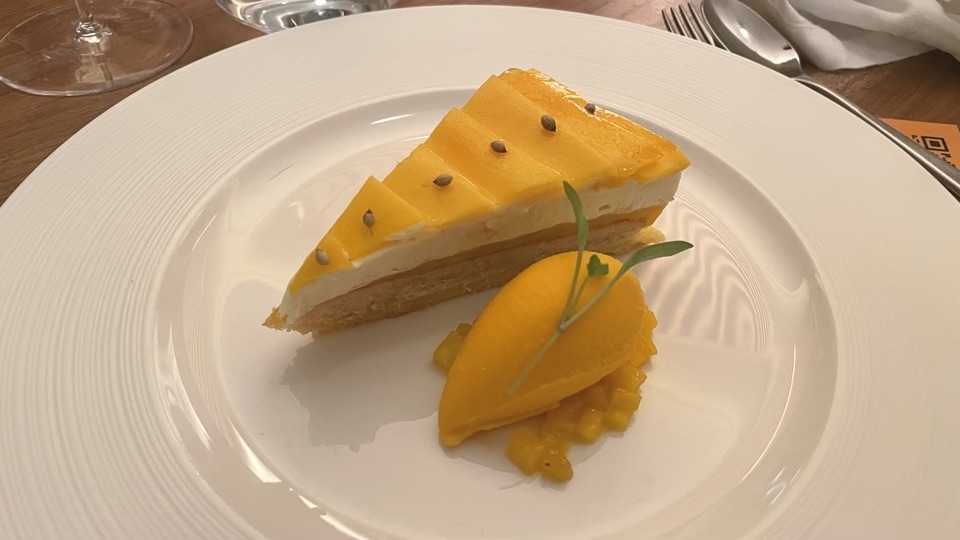 To finish, I had the Kesar mango with vanilla mousse and fresh mango sorbet. Light and refreshing, this was perfectly executed, with just the right amount of bite.

On to the wines. I upset one or two of this parish by blaspheming against Jacques Selosse when I recounted how one bottle performed. I make no apologies for that. I criticize when I see fit and praise likewise, which is what I will do here. The 2007 Extra Brut Millésime Grand Cru sings like a choirboy in an empty cathedral. Limpid straw in hue, it presents a bouquet of lanolin, crème brûlée and acacia honey scents, with just a light oxidation underneath, here lending complexity. There is a slight viscosity at opening, along with fleeting glimpses of orange pith and apricot. A subtle bitter edge imparts tension on an ebullient, saline finish that lingers in the mouth. This is a brilliant Champagne and, lo and behold, unlike last time, everyone finished their glasses. 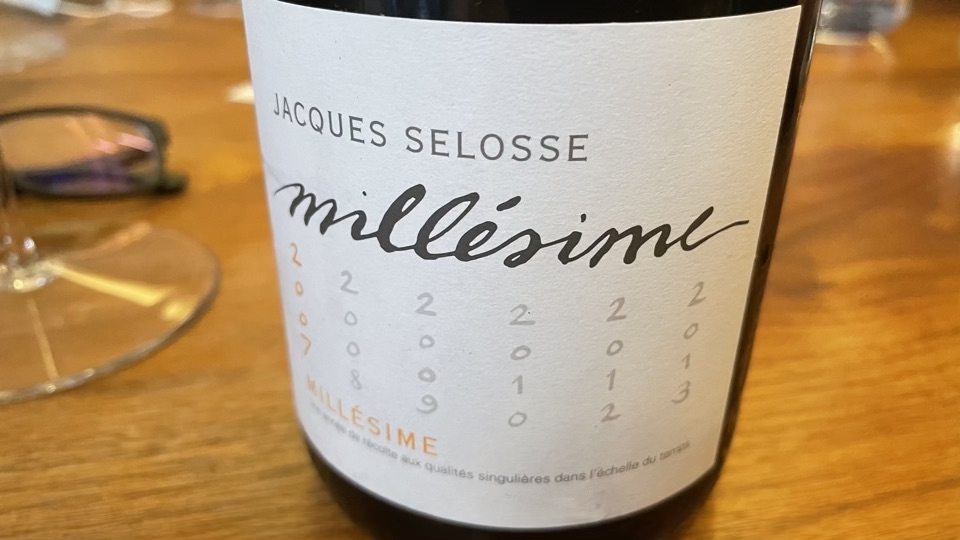 The 2007 Musigny Vieilles Vignes from J-F Mugnier shows modest bricking, looking a little more mature than the other four 2007 Grand Crus, with vestiges of brambly red berries on the nose. An initial dustiness blew off, while a touch of balsam never quite dislodged itself and marginally obscured the terroir. The laid-back bouquet never kicks on and flourishes in the glass, unlike other wines that eventually made its aromatics seem a little staid. The palate is medium-bodied with quite a firm backbone and fine grip, perhaps a little austere but still harmonious. Silky but slightly stolid, this is a delicious Musigny, though I would not put it in the top tier of Mugnier’s oeuvre, since it lacks substance due to the growing season. Next came the 2007 Chambertin Grand Cru from Domaine Armand Rousseau. Unlike the Mugnier, the bouquet needs no time to warm up, exploding with enticing scents of raspberry, mulberry, touches of camphor and undergrowth, and, after 30 minutes, hints of Japanese green tea and clove. Exquisite in definition, this remained captivating throughout the evening. The palate is beautifully balanced with a fine bead of acidity, cohesive and, for the 2007 vintage, quite robust and powerful. The velvety texture toward the finish highlights the lack of concentration in the Musigny. An utterly sublime Chambertin that is drinking perfectly now, the 2007 possesses the substance to mature another 20 years in bottle.

The 2007 Richebourg Grand Cru from Domaine Méo-Camuzet is the most modern on the nose, the oak more prominent than in the Chambertin, which has completely subsumed the modest use of new wood. Yet, over two or three hours that oak becomes assimilated, revealing aromatics that are beguilingly crystalline and precise; a very subtle ferrous scent emerges with time. The palate is silky-smooth, texturally the most seductive of all five reds, and the fruit a little darker, perhaps. Its sensuality is matched by its mineralité and the length is undeniably impressive. While Rousseau’s Chambertin started out as the front runner earlier in the dinner, I was smitten by this regal Richebourg. Jean-Nicolas Méo has overseen a brilliant wine. In retrospect, the 2007 Romanée Saint-Vivant from Domaine Sylvain Cathiard was the big hit of the night. I sat in awe of its presence. Given such strong competition, I might not have bet on that before this five-way face-off. The 2007 comes from a period when Sébastian Cathiard was working with his father Sylvain and just before the inauguration of their new cellar. It declined to make a grand entrance and let others, not least the Richebourg, reap the bon mots. Surprisingly, it began in slightly rustic fashion, quite stalky and tertiary in style. This was just a phase. Midway through dinner, around “cannelloni o’clock,” it transfigured into a quite spellbinding RSV that floored its audience, almost audacious on the nose of pure black cherries, crushed iris petals, incense and wild heather. The palate is blessed with beguiling symmetry and perfectly pitched acidity, an alchemical coalescence that was wondrous to behold, and seamless toward the satin-textured finish, which had the most depth of all five wines. It seemed to come in from nowhere and ended up my personal wine of the night. This is Romanée-Saint-Vivant firing on all cylinders, but I would decant any bottles. 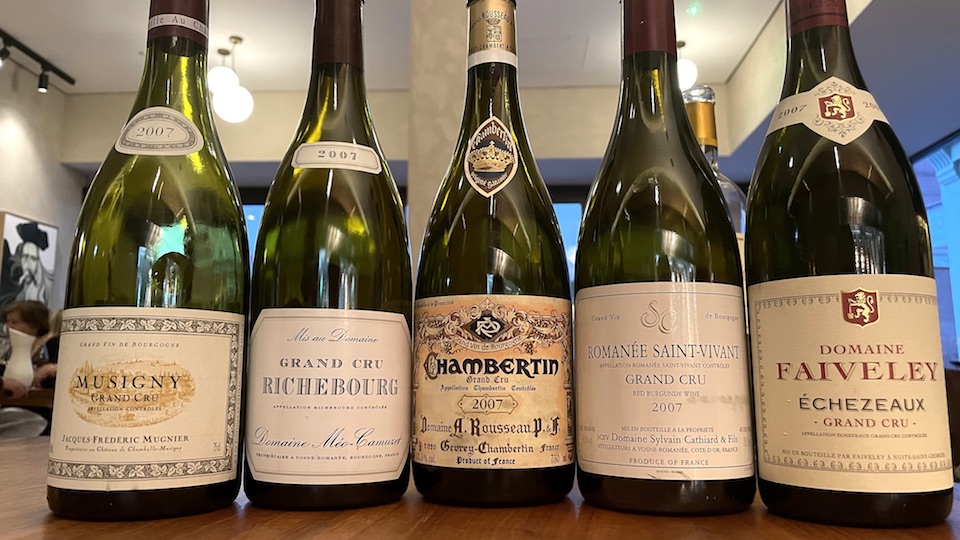 On paper, you could argue that the 2007 Echézeaux Grand Cru from Domaine Faiveley was out of its depth given such company. I would not say that, though it was a couple of paces behind the competition… at first. Ripe and opulent on the nose, offering scents of strawberry and pomegranate mixed with briary and earthy scents, it does not convey the natural “flow” of the Rousseau or Cathiard. The palate is actually much more impressive, featuring almost crystalline red fruit, a velvety-smooth texture and moderate length. It turns increasingly ferrous with time and feels just a little labored on the finish. This was certainly a credible showing by a wine worth looking out for, not least because it is much cheaper than the other wines present at this dinner.

There was only one way to finish: by switching over to Sauternes for the 2007 d'Yquem. This is a vintage I have tasted several times. Lucid amber in color, it has a reticent nose at first, though it blossoms with aeration to reveal captivating aromas of mirabelle, dried honey and beeswax. A subtle adhesive scent loiters backstage. The palate is medium-bodied with vanilla pod and almond on the entry, and very tensile with a seductive viscosity toward the close. Touches of nougat and white chocolate lace the finish of one of the finest d'Yquems of this decade. Glorious to drink now and doubtless glorious to drink in 50 years’ time! 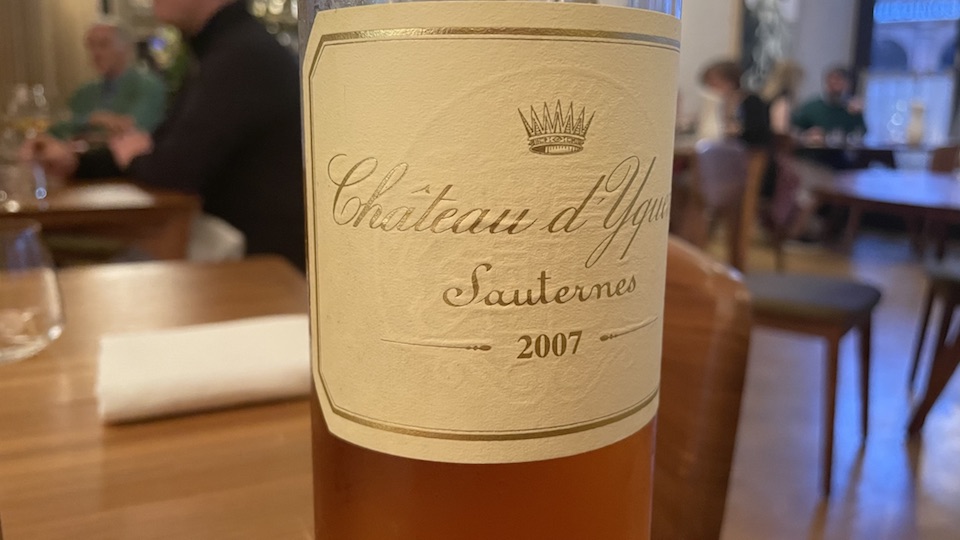 Coming so soon after a fallow period for dining out, this evening at Trivet was perhaps even more enjoyable than if it had taken place before the pandemic. The company, the dishes and, of course, the wines were all exemplary. It was not only a joy to spend time with these exceptional bottles, but also an enlightening experience where the beguilingly mercurial nature of Burgundy transfixed us for the entire evening. Roll on the next!