La Ciau del Tornavento is one of Piedmont’s most dramatic dining rooms. Set in the hills of Treiso, in the heart of the Barbaresco zone, La Ciau offers spectacular views of these gorgeous vineyards through large sliding glass doors which are left open when weather permits. The tables are spaced far apart, which adds to the feeling of calmness and serenity. La Ciau is famous for its extraordinary wine cellar, which is one of the most lovingly-cared for collections I have seen in Piedmont (the other is at Guido in the Relais San Maurizio). Chef/Owner Maurilio Garola is passionate about fine wines and it shows in the quality and quantity of the bottles he has assembled. Only a portion of the wines in the cellar are actually on the list at any given time. Readers who have the opportunity to take a tour through the cellar should not hesitate to do so. 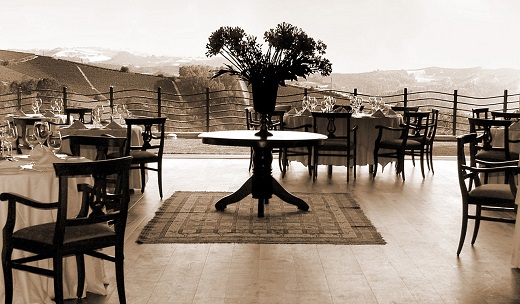 Over the years La Ciau has acquired a reputation for somewhat inconsistent cuisine, but that is largely because it is located in Piedmont, where the competition is formidable, to say the least. Even the occasional uneven meals here I have had would far outpace the level of what is available in most Michelin-starred restaurants in Italy, or New York for that matter. This dinner was by far the best meal I have ever had at La Ciau, so my hope is that the kitchen has addressed some of the issues of the past. La Ciau is a beautiful spot for a lunch or dinner, and I am only sorry that so much time had passed between visits.

One of the hallmarks of Chef Garola’s cooking is a greater reliance on fish and seafood than is normally the case in the region’s other restaurants of this level. The hazelnut-crusted shrimp was a dish that worked surprisingly well in marrying delicately fried shrimp with hazelnuts, a staple of the local kitchen. Jacques Selosse’s NV Contraste (disgorged 2004) is one of the finest Pinot Noir-based Champagnes on the market. This bottle was superb. The wine revealed beguiling aromatics and waves of flavor in a large-scaled, dramatic style. Constantly changing in the glass, the wine offered more than enough complexity and structure to pair beautifully with a wide range of foods throughout the evening.

My tagliolini with porcini mushrooms was sublime, and easily among the finest dishes I have ever enjoyed here. The braised pork was delectable and packed with flavor. I was thrilled to find a bottle of Bruno Giacosa’s 2001 Barbaresco Riserva Rabajà on the list. The wine was as monumental as it has always been. This vibrant, beautifully-delineated wine revealed layer after layer of dark, ripe fruit intermingled with sweet balsamic notes that danced on the palate with uncommon grace, particularly for such a big wine. While some bottles have shown overt oak flavors, this bottle offered remarkable seamlessness and balance. It was a breathtaking wine that continued to develop positively over the course of several hours.

I finished my last glass of the Barbaresco with a delicious selection of Piedmont’s finest cheeses. I am not huge dessert person, so the light cookies and pastries that were served with coffee were just enough to satisfy my sweet tooth. This was phenomenal dinner at La Ciau. Readers in search of a first-rate overall dining experience in Piedmont with an emphasis on wine owe it to themselves to spend some time at La Ciau del Tornavento.